A Flib cannot digest it's food
Unless it's cut in pieces,
And then it likes to share the lot
With its nephews and its nieces!
They sit around the snipty trough
All wary with their flerkins,
And tuck their snops beneath their chins
So as not to stain their jerkins.
The flib takes out a snarping tool
To cut the plog in sections,
The juice runs out all zumpling goo
And flows in all directions.
The rudest niece cries out 'Me first!'
And  the Flib gets quite irate.
'I'll podge your snup, you skiddy girl.
You've got to learn to wait!'
At last, all served, they grab their garks
And splug and squib and squeal!
Then, big and fat they all go 'Splat!'.
Oh what a lovely meal!
*
------------------------------------------------- 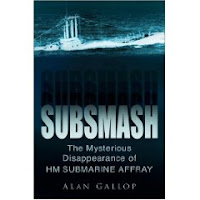 AFFRAY
A fantasy woven around a true story.
Written in 1951

It fell in nineteen fifty one upon an April day
That out into the channel went the submarine 'Affray'.
Her back was shining like a seal's and strong and thick besides.
Three score and fifteen mariners were locked within its sides.
'Go up into my conning-tower! Look out and spy the land,
For we must surely plunge below when ten leagues from the strand.'
Thus spoke the captain heartily; the engine throbbed and sang;
The galley and the engine rooms with merry voices rang.
'Oh sir! I see some land ahead and it will soon be night!'
'Surely!' the Captain answered him, 'It is the Isle of Wight'.
'Oh sir! I see an albatross! An omen I have heard!
'Surely!' the Captain answered him; 'A foolish sort of bird.'
'Oh sir! I fear we all must die! I fear some dreadful fate!'
'Surely we dive! the Captain said 'And we surface again at eight.
Go up into my conning-tower! Look out and spy the land
For we are going to go below exactly as we planned.'
The night was dark, the moon but new, the sea on every hand,
When the Captain gave the order 'Dive! We are ten leagues from the land!'
Oh hearty, hearty was the crew, three score and fifteen men.
Oh little, little thought the crew they would never rise again.
'Oh I've a maid in Dartmouth town and for me I know she'll wait
Until the time that duty's done and we rise again at eight.'
The sea closed over the 'Affray' and the crew was full of hope
For they saw the sea was calm as glass from the little periscope.
'Go up and look through my periscope! See if other vessels pass.
If our luck holds good we shall rise at eight, for the sea is calm as glass.'
'Oh sir! The sea is smooth and black and the moon is round and white.'
'Surely!' the Captain answered him. 'We're in for an easy night.'
'But sir I see an albatross upon our periscope!
It's eye is looking back at me! I fear there is no hope!'
'Surely' the Captain answered him, 'A bird is but a bird.
Forget the childish fairy tales you foolishly have heard.
But since your heart is full of dread I'll respect your foolish whim.
If we dive down deep he will fly away and we'll be rid of him.
Pull in, pull in your periscope! We will dive six fathoms more
And be rid of yonder albatross, which seamen feared of yore.'
The black sea closed on the 'Affray' and the moon shone large and white
And the landsmen slept in their cosy beds on the shores of the Isle of Wight.
For all your ships, your radar sets, your aeroplanes and men
The lovely submarine 'Affray' will never be seen again.
QUOTE
At the time Affray went missing it was such big news in Britain it relegated the first events that culminated in the Suez Crisis to page two of the national newspapers. There was some urgency in the initial 48 hours of the search as it was estimated the crew would not survive much longer than this if they had survived whatever had sunk the submarine in the first place. During the search a morsecode signal (via tapping on the submarine hull) had been received by two of the searching ships reading "We are trapped on the bottom", but this did not help in locating the sub. After three days the search was slowed down and fewer ships were used to locate Affray. In Britain the missing submarine was getting a lot of publicity. Rumours abounded of mutiny, seizure by the Russians etc. Meanwhile the Royal Navy continued its search. During the search many strange things happened, the strangest was a massive object found on the bottom by sonar, the search vessel realising it could not have been Affray due to its size continued on, when it returned several days later to establish what it was, it had gone. Another strange event was the wife of a skipper of one of Affray's sister submarines claiming to have seen a ghost in a dripping wet submarine officer's uniform telling her the location of the sunken sub (this position later turned out to be correct) - interestingly she recognised him as an officer who had died during World War II, not a crew member of Affray.
Posted by Rinkly Rimes at 9:03 PM

Two tours de force here. You're really good at these story poems:
Your whimsy very whimsical, your Affray very dramatic. You've kept a good swinging rhythm throughout. I can imagine you with a crowd of kids sitting round you, listening avidly as you read.

PS I note you count like the French: three score and fifteen = soixante quinze!

Love these Flibs! Your poem tickled my funny bone!

I was so caught up in the story of the Affray at the time, as daily reports of its sinking came over the radio, I made a painting of the scene which still exists in Margate. I recall also, at the time, that between
the news hours, I would also be listening to Dick Barton, a weekly detective drama on the radio. Thanks for your take on this sad story.

I loved your whimsical poem. Clever and fun. I think Dr. Seuss would approve!

Fun, fun, fun! Thanks for the grin on my face!

It really made me smile, yes! Pretty funny..