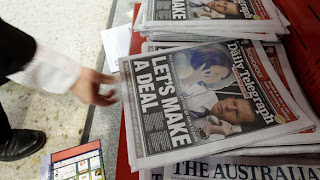 Read your chosen poem!
CHOICES (1)
When it comes to a subject such as this, it's very hard to be lyrical!
Australian Politics leans toward something much more satirical!
The Parties are running neck-and-neck, with faults on every side,
And now it's three Independents who are going to decide!
These three gentlemen are farming types and they're thrilled to have this power.
Rural people have been neglected, so this is their shining hour!
There's lots of haggling going-on, behind closed doors, of course,
With three unknowns, quite suddenly, becoming a driving force.
Suddenly the 'Bush' has found three very strident voices.
But what will become of the rest of us, the victims of their choices?
*
--------------------------------------------------------------

CHOICES (2)
And over the Tasman, our 'cousins' have been hit by a mighty quake.
New Zealand is the Shaky Isle, but it doesn't always shake.
I have never felt one jolt when I have visited there,
But now Christchurch is in trouble; they've had an enormous scare.
Australia and New Zealand enjoy something of a feud;
Whenever they speak of each other they must say something rude!
But when we had our Bush Fires, the Kiwis made donations
That, calculating per head, made them the most generous of nations.
And now I hear that aid from here is flooding over there
With Aussies donating generously, all that they can spare.
Here's where I raise the subject of  'Choices' once again.
New Zealand's pain is as nothing to Pakistan's grief and pain,
And yet we've proved to be niggardly about the latter's woes.
'Blood is thicker than water' that's the problem, I suppose.
We tend to favour 'the family' and that isn't very strange.
When it comes to Choices, some things never change.
*
Posted by Rinkly Rimes at 6:26 PM