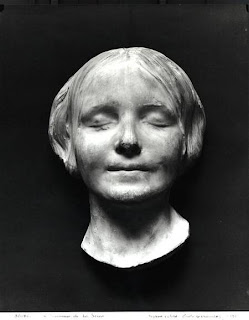 The words in blue are the opening words of
Mark Twain’s ‘The Adventures of Huckleberry Finn’
L'INCONNUE: THE UNKNOWN
You don't know about me....
*
And you never will.
*
When first they plucked me from the Seine
They only saw
Hair like seaweed,
Orifices filled with mud,
Clothes disshevilled and filthy,
Maybe creatures
Of the water
Now part of me.
*
They laid me on a slab
In the morgue
With all the other bodies
Set there for recognition.
*
It was then they noticed my smile!
*
There,
Among the gaping, twisted, macabre faces
Of other suicides,
Was my face,
Smiling,
Serene,
Beautiful and young.
But, above all, smiling.
*
I must have been happy to die!
*
You don't know about my past.
*
You never will.
*
Shopgirl, nanny, mistress,
Pregnant?
That's my secret.
*
But you loved my smile so much
That you preserved me
In a death mask.
*
No-one ever claimed me.
No parent, friend or lover.
I remained Unknown.
*
But my lips have been kissed
By more people
Than any other lips on earth!
*
What was my name?
Berthe? Yvonne? Mathilde?
Who knows.
But the whole world knows me as
L'Inconnue.
*
Read More:
"The popularity of L’Inconnue did begin to wane as the century went on, but her image was revived in the 1960’s, thanks to a new development in medical training. In the 1950’s, Dr. Peter Safar refined a system of lifesaving techniques that eventually became known as CPR and he recruited a Norwegian toy manufacturer, Asmund Laerdal, to produce a mannequin on which these techniques could be practiced. As he created this mannequin Laerdal was inspired to give it the face of the young woman who drowned in the Seine, thus allowing CPR trainees to symbolically save her life. By now, Resusci Anne (or CPR Annie as she is called in the U.S.), has been saved thousands, if not millions of times over, and her face has become known to new generations of admirers as “the most kissed face of all tme”. It’s a fitting tribute to L’Inconnue, whoever she may have been, in that her ultimate legacy will not only be tied to tragedy and death, but to compassion and survival."
*
-------------------------------------------------------------------- 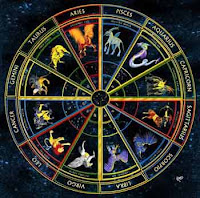 Like oil and water this is not the simplest sort of mix!
'Home-body' meets 'High-Flyer'! A tricky one to fix.
There's Aries, dressed-up to the nines, longing to hit the town,
And Taurus saying ' Let's relax.' and 'Why don't you calm down?'
Taurus can be a solid mate, rather dull but stable,
And always with a weather-eye beamed on the dinner-table.
Taurus is a manager; Aries likes to spend;
But maybe they can compromise and do well in the end.
Taurus can be possessive, which can cramp an Aries' style,
But Aries may like to be 'possessed', sometimes, for a while.
In bed they'll both be really great, but, sadly, in the morning
Aries may still find Taurus dull. That's when Aries will start yawning!
Aries enjoys a conversation, problems must be aired,
While Taurus can be so laid-back the soul is never bared.
This frustrates poor Aries, who often may explode,
And even, when things get extreme, Aries may hit the road!
But, if they hang-on long enough, Aries will come to see
That Taurus can be a steady sign to have in a family-tree.
The home will become a haven, not just a some 'gilded cage',
And this is a couple who may grow close.
Like wine, they'll improve with age!
*
Posted by Rinkly Rimes at 10:27 AM

Enjoyed your revival of the L'Inconnue legend! That was a winning idea! And your Taurus and Aries poem is a wonderful kind of starry chess game! Most entertaining!

Now that was different.in a nice way!

I loved the smile and lips kissed more than any others and your great summary of the reality. I went back to look at the face again and could only come up with one word: Acceptance.

Liked the Aries/Taurus piece as well. I'm an Aries who used to be married to a Taurus. Close to home.

I'm not sure where to begin ... wonderfully written, fascinating facts and astrology too! just brilliant :o)

I love you response to today's prompt - such a darkly mysterious piece, bringing this girl to life once more. Fascinating.

I'm going to wonder forever why she was smiling. Nice take on the prompt.

I should have known this was you, I so enjoyed this .. and the history is appreciated. You have so much talent, I dare say ... I wish you could lend me some.

Wonderful! Loved the writing, the facts and the astrology too! A real winning mix for me. :-)

How lovely that you have preserved her in a poem as well.