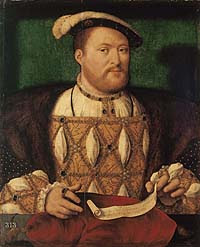 THREE WORD WEDNESDAY
http://www.threewordwednesday.com/2010/09/3ww-ccv.html
Chosen words
'robust, charm, feast'.
SETTING ASIDE......
Let's set-aside his later years, his corpulence and wives.
Let's draw a curtain over ways he ruined other's lives.
Let's turn a blind-eye to his health in his declining years.
In fact, let's try ignoring how he usually appears......
Henry the Eighth, a travesty of any normal man,
Was something very different at the time his reign began.
*
For one thing he was robust, and unusually strong;
His ability at sports delighted the adoring throng.
For another he had charm, as everybody, then, agreed,
And he was also clever, reading all that he could read.
At a feast he was great company, a teller of tall tales,
With a sharp eye for the ladies, like so many Alpha males.
He was, also, a musician, composing melodies,
The ever-popular 'Greensleeves' was said to be one of these.
He was a politician of astuteness and renown,
Not just because he had the power and wore a nation's crown.
In fact, he was remarkable, and not a cause for laughter;
We shouldn't be too influenced by all that followed after.
*
Read of his various illnesses, then you will realise
He was something more than a lecher who grew to a monstrous size.
We should judge him by his era, his position and his health,
And the way that he was moulded by politics and wealth.
Were he living nowadays I think that we would see
More than the bloated womaniser known to history.
*
From the Venetian diplomat Pasqualigo in a dispatch, 1515

"His Majesty is the handsomest potentate I ever set eyes on; above the usual height, with an extremely fine calf to his leg, his complexion very fair and bright, auburn hair combed straight and short, in the French fashion, and a round face so very beautiful that it would become a pretty woman, his throat being rather long and thick.... He will enter his twenty-fifth year the month after next. He speaks French, English and Latin, and a little Italian, plays well on the lute and harpsichord, sings from book at sight, draws the bow with greater strength than any man in England and jousts marvelously.... a most accomplished Prince."
*
------------------------------------------------------------

Countless millions, thronging, thronging.
Humanity galore!
Imagine if you were belonging!
Now there'd be one more!
All that Science! All that Art!
A country like a world apart.
*
Posted by Rinkly Rimes at 11:06 PM

Beautifully rhyming and perhaps a bold judgement on a king.. a lovely depiction of China..

I really enjoyed reading this, I could read a whole book of interesting facts like this ... fascinating and brilliantly written.

This is such fun! Thank you for bringing light to an intriguing character from history. I learned something... always grand!

Wow. Interesting take on the old boy. It is hard to overlook executions though, and the Catholics have a bone to pick with him too.

This is a wonderful poem.

He really does represent a fascinating time in history. It's too bad he didn't set more store in his daughters. Who knows how history would have changed if he had been satisfied with them.

A wonderful history lesson in this.

I love how you educate AND write great rhymes! :-)

I always enjoy my visits here.

A beautiful poem Brenda...you're a magician of words as always and your rhymes' always a treat!

Now I have learned a beautiful lesson about Henry VIII...

Thanks for sharing Brenda!