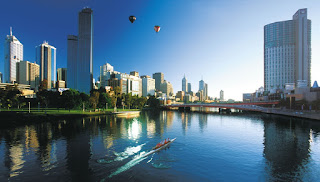 Panoramic press shot.﻿
MELBOURNE A LA MEME
The easiest way to cover it, it seems,
Is by using that Blog artifice, the 'memes'.
I can cover all the aspects of our stay,
And also get the week's memes underway.
*
We flew off to Victoria recently
Just for a few days (well, it was only three).
A Short Break holiday was what was needed:
We sought a successful trip and we succeeded!
*

RUBY TUESDAY
http://workofthepoet.blogspot.com/
The plane we flew in was a Virgin Blue
Although you'll say it's red, and that's quite true.
The journey was quite short, an hour or so,
So flying seemed to nicest way to go.
* 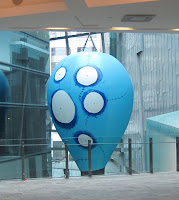 BLUE MONDAY
http://smilingsally.blogspot.com/
Melbourne is a town with many quirks.
Here's an example of the wierdest works!
Tucked round a corner, far from peeping eyes;
And giving passers-by quite a surprise!
* 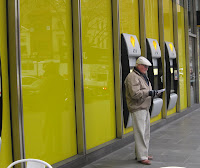 
Malcolm was 'rugged-up' and so was I;
The breeze was stiff beneath a wintry sky.
This ATM had a very yellow hue,
So I thought for Yellow Monday it would do.
* 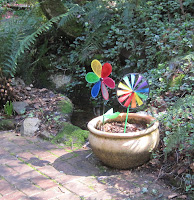 COLOR CARNIVAL
http://colorcarnivalmeme.blogspot.com/
These ornaments were seen upon our way
When we went out with some friends to a cafe.
The sun came out and brightened-up the scene
And here and there were signs of Springtime green.
* 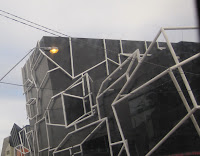 ABC WEDNESDAY
http://abcwednesdayround3.blogspot.com/2010/09/j.html
(Letter 'J')
This building seemed to be a jigsaw jumble
With geometric shapes all of a tumble.
I loved the curious buildings on display!
It seems that there are no rules to obey!
*


Not a genuine monochrome I fear
But I don't think there is any colour here.
I thought this pavement statue rather quaint,
Much better without any sign of paint.
* 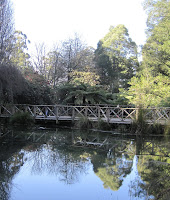 WEEKEND REFLECTIONS
http://newtowndailyphoto.blogspot.com/
Our 'middle' day was bright and blue
So quite the very best thing to do
Was visit a Rhodedendron Park
Though winter branches were still stark.
*

The Cathedral was pleasantly still and quiet,
Shut away from the city riot.
Even a heathen such as me
Appreciates tranquility.
*

SKYWATCH
Typical Melbourne wintry weather,
Chilly and grey but not altogether.
Frequently the sky was blue.
That was when the sun peeped through.
*

WATERY WEDNESDAY
http://waterywednesday.blogspot.com/
St Kilda was blustery as you see here;
Quite like winter out on the pier!
We enjoyed our journey on the tram.
(You see how easily-pleased I am!) 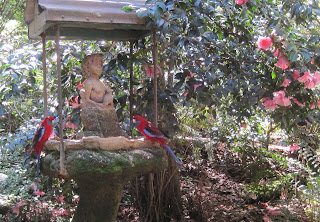 
Up in the Dandenongs the bright rosellas
Prove that they are  colourful fellas!
Here they pose in a cafe's grounds
As other parrots make joyful sounds.
* 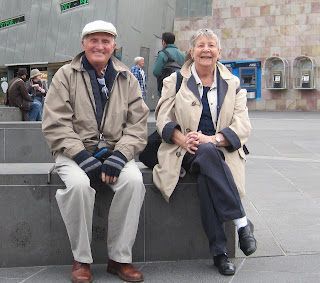 Finally, to prove we were really there,
The two of us in Federation Square.
Winter woolies the order of the day
But we very much enjoyed our stay.
* 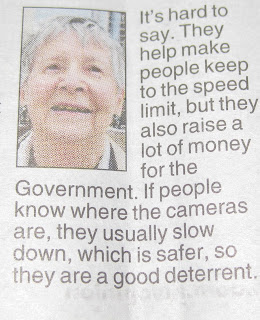 P.S
As an addition to our Melbourne caper
My face was in the local paper!
Asked my opinion, as we walked in the street,
By a reporter we happened to meet!
A first for me at my great age!
(Sadly on a very minor page!)
*

Wonderful. I thoroughly enjoyed the visit through your eyes and verse. Skywatch neatly sums up a typical Melbourne day. Thank you.

What would we do without our meme suggestions!
I like the last one the best that shows what a wonderful few days you both had. Welcome back!

What fun for all the days (memes)! You wrapped it all up in one! Love the last shot! Hope you have a great weekend, Brenda!

Wow! What a great tour through your memes! Loved all the photos!
take care!

I enjoyed looking at all your photos in one entry.

LOVE IT !!!
You really can the art of rhyming !
Happy weekend !

Love the pic with your husband!

You had so many variations here that I don't quite know which to choose, but I have decided on the first and the last but one. Highly approved.

Clever way to recount your beautiful vacation. Totally enjoyed your words and pixes. What a great post!

Well, I'm impressed, Brenda. I remember when poetry tumbled out of me with little or no effort. Now I can't find a rhyme in time. It would take me a week to do what you seem to have done in a day, and you've done it with a purpose.
The pictures are super. When I was in Australia, I dearly loved all the bright-coloured birds, but on the other hand I always find it difficult to resist a pier. The expanse of yellow is really something else, isn't it? Good job!!

Wonderful photos. Love the last one, you're a gorgeous couple.

Wonderful photos for all the memes. Great post, have a great week and Happy Blue Monday!

I love a visit to your blog. You not only covered the memes you excelled!

That must have taken you a long time to complete. It was truly beautiful.. Happy Blue Monday.

glad you reassured me that my eyes wasn't wrong. Last summer, I flew Pacific Blue from Auckland to the Gold Coast.

A heathen, a heathen,
How can it be?
A heathen who covets
Tranquility?

And where shall she find it,
Sweet peace, pray tell?
Ah, in the cathedral
Where all is well.

Great shots, you covered them all!

Wow, you sure covered them all. Terrific meme's and I do like the crazy jigsaw building.

How clever and inventive you are to cover all your memes in one fell swoop - so enjoyable.

A clever basket of memes all in a row!

That was simply a brilliant post! Loved all your rhymes and the cohesive way you pulled them all together! And I could definitely identify with, 'even a heathen such as me appreciates tranquility'!

Oh you're amazing...so many wonderful shots to share with us! Love your photo in the paper! congrats! I guess springtime is coming your way!


My Watery photos are about the 'disaster area' in town during a day long rainstorm. Click Here if you'd care to join me today with your visit.