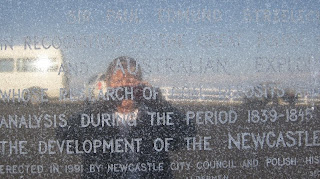 REFLECTION
http://newtowndailyphoto.blogspot.com/
MEMORY LOSS!
Beyond the fence in the background lies the sea.
We came up here to have a cup of tea,
And gaze out over the ocean, the Pacific,
Because the view is unfailingly terrific.
Suddenly I spied a marble slab nearby.
This was the first time it had ever caught my eye.
On reading it I saw the dedication;
'Someone' had been a public inspiration.
It seems this 'Someone' aided exploration!
The name was very Polish, hard to read;
Jot it down? I didn't feel the need,
Because my shot, I knew, would give the name
And when I wrote this rhyme, I'd add the same.
Now look at the result! The name's not there!
It's up there in the blue-sky bit somewhere!
So Mr 'Someone' I apologise!
Your name is not, it seems, for Bloggers' eyes!
*
------------------------------------------------------------- 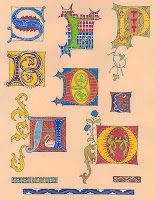 CAPITAL PUNISHMENT.
Growing old is such a joy!
It allows one to annoy!
Ignoring other people's regulations!
*
Take the rules surrounding letters!
I'm told, quite often, by my betters
'Capitals are unmannerly creations!'
When writing emails' so they say
'Don't let Capitals have their way!
You'll be a Flamer and no-one will like you!
You'll be considered very rude
Quite illiterate and crude'.
Well, my friends, so how do those words strike you?
I'd really rather like to know
Who made this rule so long ago,
Who sat down and devised this little law?
Some nit-wit in computer school
Said 'I know! Let's make up a rule
While emails are still very new and raw!
Let's see how we can do our worst!
Let's ban the Capital letters first
Then move-on to some other mean restriction!'
And now the whole world toes the line
As all emailers combine
Fearing they'll cause some inter-active friction!
Well, I'm what's known as 'getting on';
My inhibitions have all gone.
'DO YOUR WORST!' I scream with gay abandon.
Capital letters I enjoy
I'm also aiming to annoy,
AND I JUST DON'T CARE WHOSE SILLY RULES I STAND ON!"
*
Posted by Rinkly Rimes at 6:17 AM

AT LEAST YOU GOT A HIGHLY POLISHED SELF PORTRAIT!

Great one for the day, Brenda! Enjoy your weekend!

I love the reflected blue sky & seeing you in there as well!
nice job.

What a great reflection! It's so nice that you were able to capture the reflection of the blue sky.

Had a lchuckle with your second poem. The first I could so relate. The perfect shot and then a shadow or reflection hides the words!

Fun self portrait and fun rhyme.