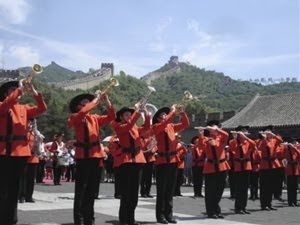 MARCHING KOALAS
This is the Great Wall of China! Not 'My World' at all!
But it's here our Marching Koalas are standing proud and  tall.
Not 'My world' but of 'My World'  for I was in at the start,
And, in a very tiny way, my family's played a part.
*
When I was still a teacher a message was sent around;
'If you wish to form a school band the money can be found'
This came from the Government, it was offering instruments,
And having our school in the scheme really made a lot of sense.
But who could play an instrument and who could form the band?
'Raise your hand' was requested! And nobody raised a hand!
Then Geat, a member of the staff, spoke up, 'Well, I admit
I played the trumpet in my youth.' So everyone said 'You're it!'
*
And, from those slim beginnings, the local school band grew,
Though it sounded squeaky at the start, that's absolutely true!
Soon it grew beyond the confines of the school in which it started;
Both my children played instruments though Rebecca was half-hearted.
Greg was enthusiastic; he plays saxaphone today;
And he is really happy when he gets a chance to play.
*
As for the Marching Koalas, they've marched the world around.
And with many accolades their prowess has been crowned.
Here they are seen in China, but they've been to the U.S.A.
And many other folk world-wide have heard the Koalas play.
They say 'From little things big things grow'  and without a doubt that's true.
Maybe one day they'll march your way.
Say 'Hi!' to them when they do!
*
------------------------------------------------------------------------ 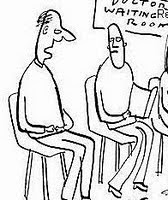 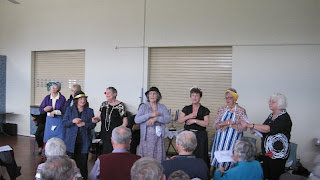 Yesterday we performed 'Jewelled Jeopardy' once again. We've nearly completed the 'run' of this play as we've done it for about ten clubs and we're ready to move on to something new. But we're still having fun. Note the red rose in my hair! Very seductive!.
Posted by Rinkly Rimes at 6:37 AM