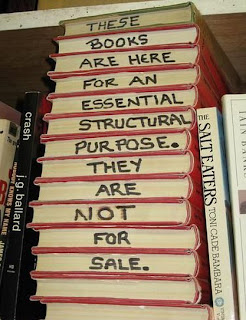 Are there any innocent little babes left in this world today,
Playing utterly childish games, the ones that we used to play?
Every heroine's sexual, the Wolf isn't after food!
It's 'boobs' and muscles and innuendo, all of it rather crude.
'Innocence' is old-fashioned; one rarely hears the word.
And maybe I'm an old woman who's verging on the absurd.
But children grow-up too quickly, at least to my way of thinking.
Childhood should be innocent.
After all, it's gone in a blinking.
*
Posted by Rinkly Rimes at 12:45 PM

That is a great sign! I have been in bookstores that used books for furniture and supports.

An interesting use for some old books.

books with structural purpose--i haven't seen something like this before!:p what a fabulous find!

These books are very creative. I like the idea to tella message this way.

my fingers would itch to move the books :)
fantastic sign