BRY ANTICS
March 14th
The week started with us having Banjo (the dog) and Blake (the eleven year-old) for a sleepover. Blake, being an only child, is able to entertain himself very well, but we all enjoyed a game of 'Labyrinth' , which I can recommend to anyone of any age over about eight years old. It involves direction-finding, which isn't my strong point, but I still enjoyed a happy afternoon playing it. 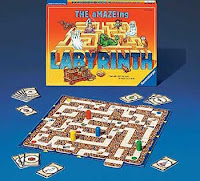 Labyrinth
Apart from Choir Practice, at which we rehearsed the moves for Lambeth Walk, Monday and Tuesday were relatively quiet days, although there's always cooking, house-cleaning and shopping to drag one away from the Blog! I did some early preparations for Malcolm's birthday celebrations. I discovered all my spices were out of date! So I had to renew the lot! Which proves I don't entertain a lot!
We had an enjoyable evening on Wednesday, but I left my camera at home, We went to 'Wests' for a show and we had a meal in the Brasserie first. There were eleven of  us at  the table and the conversation flowed. The show was an 'Elvis Presley' one. He's not a great favourite of mine but I got carried away by everyone elses' enthusiasm and I actually enjoyed it. Most of my friends are ten years younger than me, so they remembered the Elvis era with fondness, and the impersonator certainly performed well.
On Thursday I went to the Dr to hear the result of my 'claudication' scan. Now I have to see a Specialist about what to do! I had imagined the hardening of the arteries to be from top to bottom of the leg but it's only patchy, worse in some places than others. However, a patch in my right thigh is very constricted so it might need attention. I hope not. However, as Dr Chandler said, I only had my legs scanned; the chances are it's in other parts of my system too. Cheerful! Luckily I feel 100% fit when I'm not walking uphill!
Later that day I joined Becca and Max as usual, but the weather was overcast so we only went to the local park. We've had quite a lot of showery activity lately, partly as a result of the huge floods in Queensland. An area covering over 200,000 square kilometers has been inundated. The damage bill is enormous but no-one's complaining much as all the dams are full for the first time in about ten years, and the resulting boost to the economy will far out-weigh the expense.
I had a great time on Friday morning. Two good friends, Pam and Joy ,came round to rehearse their parts in 'The Red Barn'. We worked hard, and we followed the rehearsal with some fruitful discussion, plus coffee. I was in my element.
Today started with my going to Harry's swimming lesson with Greg. Harry's really doing well for a five year-old and  promised him I'd show off his prowess on my blog. 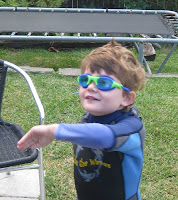 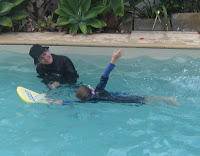 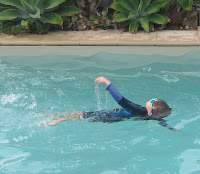 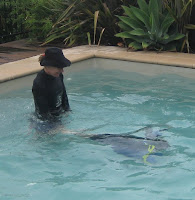 Diving through a hoop.
In the afternoon the Choir Members helped to celebrate our pianist, Lois', 70th birthday. Her step-daughter has a huge family room but the guests almost filled it and the refreshments were great. 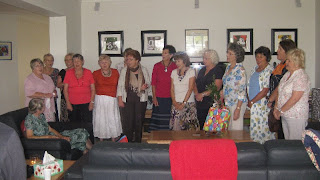 Here we are, serenading her!

I may not write a Diary next weekend as I think I'm going to be run off my feet!
I'll see you when I see you!
Brenda
Posted by Rinkly Rimes at 7:16 PM