BRY ANTICS
March 6th.
Only one personal photograph this week! I've done quite a bit but friends and family have begun to whimper 'No, not again!' when I've produced my camera, so I've been disciplining myself. This group looks quite cheerful but I think they really wanted to get on with their food! 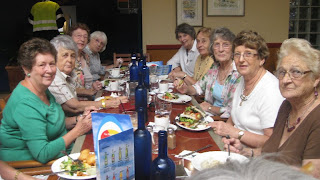 Our monthly lunch 'At the Beaches'.
The occasion was marked by a drenching! Just as I got out of my car in the beach car-park a great squall of run rushed in from the sea! An umbrella was useless so I just dashed! I arrived at the lunch soaked to the skin! In fact, I had to rush home and change all my clothes before choir practice!
Other than that I ran my usual U3A Poetry group on Wednesday. It's so enjoyable. People bring along  a favourite poem and, before reading it, they have to tell us why they've chosen it. This results in a round of anecdotes and general discussions. We want to increase the number of sessions per year but I don't think U3A wants to pay any more room-rental!
A new member of the Melodrama Group, called Olwyn, came round for tea after that. She seems enthusiastic, but, like all of us, her time is limited (she's another crazy bowler!). New members are always welcome so that we have a supply of actors to work with.
I had another pleasant day with Becca and Max on Thursday and this time Malcolm came too and we all had a picnic at the Lake. The weather was overcast, but it didn't rain. After that I collected Harry from school. I taught him all his 'small letters' last year, but his school teaches Capitals first so now we're having to do some catch-up. He's a willing learner, though.
Friday was a great day. I've rewritten 'Unhand Me' as a two-hander, in case we're short of players and we all met for a rehearsal. It was hilarious. We met at Pam's creek-side cottage and she gave us tea. The new format involves a lot of hat-changing tomfoolery and it seems to have hit the mark, humour-wise.Another new member, called Bebe, joined us. We thought she might be straight-laced, but not at all!
This weekend I have Blake staying with us (the 11 year-old grandson). His parents have gone to the Central Coast to a party. He's no trouble and we've just had a great game of 'Labyrinth'. Now he's gone to the beach with his Uncle Greg and the two little cousins.
Local news? The possible Tsunami from Chile was a worry, not because anything happened but because beach-goers were warned to get off the beach and they just refused! If there's another warning and it turns out to be necessary there could be a disaster. 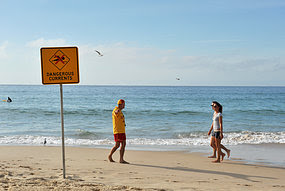 Lifeguards were ignored!
I end with an unedifying sight!  Thousands of naked Australians being photographed at the Opera House! I was glad I was no nearer than this!
Till next week!
Brenda
Posted by Rinkly Rimes at 12:00 PM

It's not every day I see so many butts mooning the camera, let alone in front of an opera house. Such a photo cries out for (no pun intended) background. Please advise.