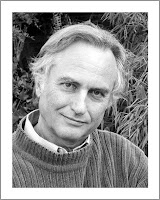 MEMETICS!
Richard Dawkins, eat your heart out
(Him wot invented memes)!
For now your invention's being used
In all sorts of harebrained schemes!
Take the Blogs for instance; there, every day, appears,
A little meme of some sort to settle between my ears.
I feel a sort of compulsion to do my very best!
I've simply got to write something. It's rather like a test!
But, in the immediate future, I just won't have the time
To fiddle about with silly little nonsenses in rhyme.
*
Malcolm's coming up for eighty; there are parties to be planned.
Jottings from on-line recipe books lie round on every hand.
Then the melodramas are active, three shows coming up quite soon,
Plus concerts by the choir at which I try to sing in tune.
Furthermore, we're going to Sydney for three days on the town
Expending lots of energy just wandering up and down.
All in all, I'll have a busy time, with activities and schemes.
So, I repeat, I'm weaning myself away from those wretched memes!
*
But
I can't quite go cold turkey; the attraction still persists.
The shock of a no-meme fortnight might make me slash my wrists!
So here they are, my entries for next week, abbreviated,
Hoping that, in this way, my frustration's eliminated!
*
BLUE MONDAY
http://smilingsally.blogspot.com/ 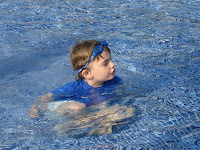 Harry swims very well now, but here he is at the start.
A Blue Boy in blue water warms the cockles of my heart!
*
MELLOW YELLOW MONDAY
http://mellowyellowmonday.blogspot.com/ 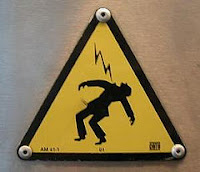 Rather a starling warning to those who might happen to be
A little bit closer than they should be to electricity!
*
RUBY TUESDAY
http://workofthepoet.blogspot.com/ 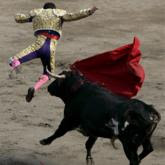 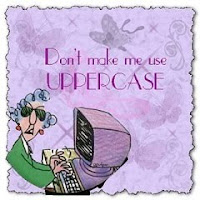 I'd love to write in Upper Case, if Net Etiquette allowed!
Because I'm that sort of person, inclined to be QUITE LOUD!
*
COLOR CARNIVAL
http://colorcarnivalmeme.blogspot.com/

Fifty little cupcakes for the birthday of a friend.
I thought that they were rather cute and sure to start a trend!
*
SKYWATCH
http://skyley.blogspot.com/

Photographed in South Africa, the famous Table Cloth cloud,
Which hovers over the mountain like a white and filmy shroud.
*
REFLECTIONS
http://newtowndailyphoto.blogspot.com/

A fund-raising Pink Party in aid of charity.
The reflections in the pink balloons were beautiful to see.
*
TUESDAY TRIVIA
http://i-refuse-to-recede.blogspot.com/2010/03/tuesday-trivia-tie-in-4.html

Blake at an earlier age leaping in and out of the sea.
A picture of tremendous joy, or so it seems to me.
*
WATERY WEDNESDAY
http://waterywednesday.blogspot.com/

I was visiting The Japanese Gardens when I saw these colourful pike.
Swimming up for titbits was what they seemed to like.
*
SHADOW SHOT 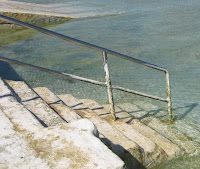 The steps leading down to the Ocean Baths are nearly worn away,
But a shadow seems to soften them on a lovely sunny day.
*
THAT'S MY WORLD
http://showyourworld.blogspot.com/ 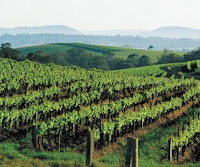 The Hunter Valley vineyards stretch greenly to the hills.
A visit to those vineyards seems a cure for all life's ills!
*
So there! I'm done and dusted! The weeks that lies ahead
Can be faced with equanimity, not meme-deprivation dread!
So I'll hie me to the recipe books and packing for my trip,
Knowing that a week of memes  hasn't given me the slip!
*
Posted by Rinkly Rimes at 9:23 PM

An opportunity to see a cluster of your photos all together - you won't manage it, though. Blogging is definitely addictive and it's almost impossible to stop!

Have a Happy, Busy week!

My have you been busy! Love all the photos - especially the 50 cupcakes very colorful and a great idea. Have a great week!

Love the CC shot...had to enlarge to realize those were indeed cupcakes. Great idea for a birthday "cake".

enjoy your time away

What a fun post! And, some did invent the memes...I have wondered about that. Great entries for all the gazillion you participate in!

It can be stressful keeping up with so many, glad you did a good supply for us while you are away and busy. Great rhymes as always!

I can't believe what you have just done here! Nifty and total fun! I have to schedule my posts so that they drift around my heavy work schedule! I always try to aim to post one a day! Sad when life includes organising blogging addictions! But it keeps me writng and taking photos and keeps the stress of work at bay!

What a beautiful meme combination for the whole week. Like the boy jumping on the waves, also the rodeo fall on his bull.

Very interesting to visit your blog. Have a lovely day.

i wish i can do this..combine all the memes for the week. am just too lazy.

My MYM is up here.

You shared lots of beautiful pictures. Thanks for sharing happy blue monday!

Enjoy your time away, Brenda! This is quite a clever post. Covering all the bases til you get back! I have to remember this! :) Happy Ruby Tuesday!

Great, fun post for the day! We have gone kind of nuts for memes, haven't we? Love all your pictures and no one can top your words!! Have a great week, Brenda!

wow,that is really amazing to put all kinds of memes in one post,i did 3 memes in one post to save me from possting everyday co'z im kinda busy to do that...your amazing and your photos are all great.
a nice week to you!

That first sign, the electricity and the person falling backwards, the language is international. No need for words. What a powerful sign.

I'm here for RT and look at all the treasures I've found. The cupcakes are inspirational!
Previous commenters are right, though, you'll find a way to blog on your travels.

Excellent...I think you've gotten it all covered. Love the vineyards, I love to stroll through them.

Keeping up with lots of memes can be very time consuming I agree. It must have taken ages to do them all at once. Long may you continue.

These memes can be addicting. Fun post and I love all your photos and your rhymes. I wish had a way with words like you. It is a talent.

I'm going to call you the multi-tasking meme maniac this week! All wonderful photos. I especially love your Color Carnival shot (of course). Have a great week! :-)

Its a great idea for your busy week. Whatever you do and wherever you are (yes, you're going to Sydney) have a good time and take care!

These are lovely photos you have shared with us.

That was really quite ingeneous.
Thank you for linking up.

Please enjoy your time with your family, and remember you are always welcome to join Tuesday Trivia Tie-in any time.

But please, never ever feel like you have an obligation. It's all in fun. As soon as it isn't fn any ore, it isn't worth it.

perfect shots fora all the memes!

love the cupcake cake
and your grandson in the surf

My favorite rhyming pair was abbreviated and eliminated--so clever. I love the poetry!

I think you hit all the memes. I, too, get a bit compulsive about posting on memes every week.

Have a wonderful weekend!

A wonderful poem and some lovely photos. I hope you get your wish.

Heck, I can't take a vacation without getting withdrawal symptoms.

Fun and clever! Have a wonderful holiday. I just got back from a 4 day trip and I'm still catching up. Kathy

Hi!
I feel the same way Maxine does. I love writing in UPPER CASE. Have a great day!

How creative and organized you are! Maxine is talking health care on my blog. Enjoy your time away!

I would be delighted if you were to use one of my tunnel photographs for one of your poems. quite delighted!