A Quirk at Work 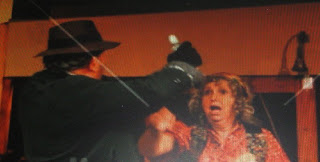 A QUIRK AT WORK!
Oh that quirky DNA!
It works in a peculiar way!
I've always loved to tread the boards
(Though never winning fat awards!)
My two children would rather die
Than act! they say they'd feel too shy.
Yet here's my cousin's daughter, Ruth,
'A chip off the old block'! That's the truth!
Here she's a drunk! (Putting on an act.
We're a sober family; that's a fact!)
Britain's rather too far to go,
Or else I'd have paid to see the show.
Although Ruth's certainly not a daughter
Doesn't it prove blood's thicker than water!
Posted by Rinkly Rimes at 7:37 AM

I will kill Martin for sending you the link to those dreadful photographs. It was not a very desirable part as I looked like an old hag in that awful wig but I did enjoy the gin!! My dear dad would turn in his grave if he heard the language I was uttering, unfortunately nobody else tolerates alcohol like I do!! Only joking, I hardly drink. I did direct the other play which was a great success and I now believe my treading the board days are over and directing calls, there are no lines to learn. The play I acted in was about a Charity Shop and I was a drunk working in it. The one I directed was "The fat lady sings in Little Grimley" by David Tristram.

gladly pay tribute to those artist of old days...
I love that story of Little Grimley...