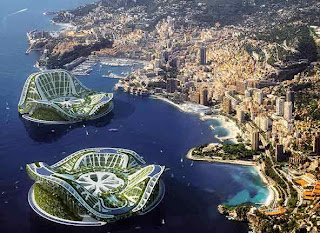 Vincent Callebaut Architectures
LILYPAD LIFESTYLE
If the climate keeps on changing and the waters rise and rise,
Strange new architecture will form before our eyes!
For, if cities keep on growing, as humanity explodes,
How will we ever cope with all the vehicles and roads?
We can't take all the farm-land, we need that for our food;
And if we spread and spread and spread, isn't that rather crude?
A Frenchman has invented an ecopolis, seen here,
In which humanity can float, not on the land, but near. 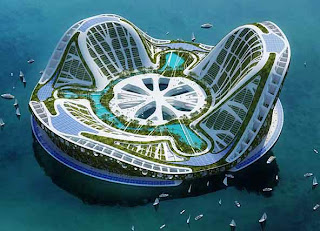 *
Fifty thousand inhabitants would float out on the sea,
Admirably served by perfect self-sufficiency.
* 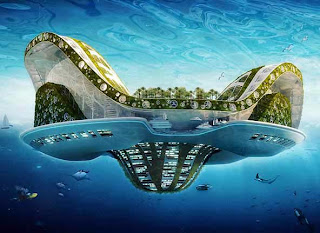 *
It may seem very strange to us, since the whole idea is new.
And the thought of Lilypad living seems too crazy to be true,

But not so many years ago the heights of fantasy
Were aeroplanes and phones and robots, X-rays and TV!
However, I am elderly, and I am rather glad,
That unlike frogs, I'll never be asked to hop on to a lilypad!
*
Read more:
This floating Ecopolis has the double objective not only to sustainably widen the offshore territories of the most developed countries, but also to provide housing for the future climatic refugees of the soon to be submerged territories such as the Polynesian atolls.he Lilypad is an amphibian half aquatic and half terrestrial city, able to accommodate 50,000 inhabitants with fauna and flora around a central lagoon of fresh water collected and purified by rainwater. The Lilypad also includes three marinas and mountain areas dedicated to work, shopping and entertainment. The entire island is covered by a stratum of housing in suspended gardens, accessible by a network of streets and alleyways.Entirely self-sufficient, Lilypad takes up the four main challenges launched by the Organization for Economic Co-operation and Development (OECD) in March 2008: climate, biodiversity, water and health. The Lilypad has a positive energy balance with zero carbon emissions using the full integration of all the renewable energies (solar, thermal and photovoltaic energies, wind energy, hydraulic, tidal power station, osmotic energies, phytopurification, biomass) producing more energy than it consumes. The Lilypad will purify and recycle waste water and by integrating ecological niches, aquaculture fields and biotic corridors on and under its body, the Lilypad will meet its own food needs.Vincent Callebaut Architectures explains that the goal was to create a harmonious coexistence of human-kind and nature, to explore new modes of living on the sea spaces of social inclusion suitable to the benefit of all the inhabitants – locals or foreign-born, young or aged people.
Posted by Rinkly Rimes at 7:19 AM

Looks beautiful...but for the trees I would have hated the concept...What are we headed for?

Fascinating! Who would have thought of such a thing!

I am also glad that I will never have to hop a lily pad. Terra Firma is where I want to be.

I was wondering what would take the place of Noah's Ark! We need ideas like this as the planet reshapes itself from time to time!

The world needs vision and visionaries. I remember watching The Jetsons as a kid. I would marvel at the futuristic landscape and hope that someday my world would look like that. Glad to see I'm not the only one with big dreams!