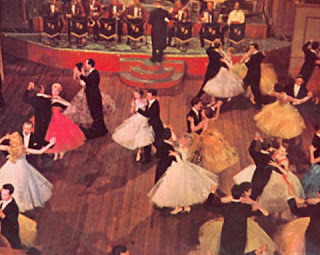 ABC WEDNESDAY
http://abcwednesdayround3.blogspot.com/
Letter 'H'
HAMMERSMITH PALAIS
All I knew of Hammersmith was its famous Palais de Danse!
The equally famous Meat Market didn't get a second glance.
It was almost 'a place of ill-repute' in my giddy younger days,
But that didn't stop us going there! The Palais was the craze.
Compared to the 'dives' of the present day I suppose it was rather tame,
But hints of indiscretion seemed to add spice to its fame.
And it's true that for gentlemen on the loose it was something of a mecca,
Being a place long favoured by the wide-boy and home-wrecker.
It held thousands of dancers, and the floor was specially sprung,
So that it rose and flattened as the many dancers swung.
And swinging around was essential so the gentlemen could view
The layers and layers of petticoats, white and pink and blue,
That the girls all wore; plus the shoe-string straps and the heels that teetered high,
Swinging around under twinkling lights that echoed a night sky.
And the great bright ball revolved above in the centre of the ceiling,
And the whole excited atmosphere gave one quite a funny feeling!
Of course, the girls had to be asked; there was no equality then
And there were times when one had to dance with unattractive men.
'Do you come here often?' they'd whisper in your ear.
Oh yes, in the nineteen fifties partners danced very near!
It ended in disappointment many more times than not,
But it was great just to be there in London's great night-spot.
The dance-bands were so thrilling, up on the revolving stage;
Every one a household name and quite the latest rage.
Four bands would be performing; they took it in turns to play;
As one completed its time-slot it would silently swivvle away.
And then we'd buy the records and learn the latest song!
To what a very different era these memories belong!
*
Two years ago they pulled it down, so you'll never have the chance
To spend a night as I did at the famous Palais de Danse. 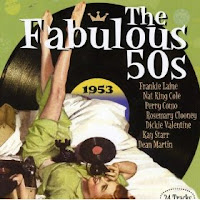 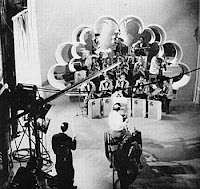 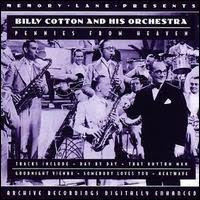 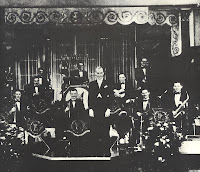 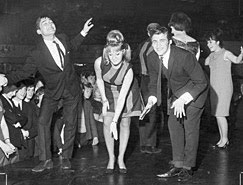 At least they wore ties! 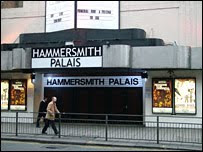 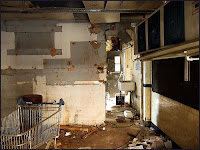 And it all ended in tears!
*
"The Hammersmith Palais is one of Britain's most legendary venues, having played host to acts in all the important musical styles of the 20th century.The building opened just after the First World War as the Palais de Danse with the original Dixieland Big Band. In the Twenties it was converted briefly into an ice rink before reverting to duty as a dance hall.During the Second World War the BBC broadcast Services Spotlight from the Palais. Big band stars including Stan Kenton, Joe Loss and Glenn Miller all played there. It was demolished in 2007 to make way for a block of flats."

Marvelous post for the H day, Brenda! Surely did bring back some memories! Hope your week is going well!

Why didnt I see you there?
Couldnt get in without a tie.
Joe Loss was the band...Victor Sylvestor not!

This makes me think of the Kinks record come dancing. I've never been to a Palais, but you've described the whole era so well in your usual unique style.

Absolutely gorgeous painting. Wow. And what a fun thing to learn. I like that music! Very happy and upbeat!

Oh, I'm so sorry it was demolished. Thanks for sharing the history and the poem.

All good things come to an end.

Ah, what fun the dance halls were! Your words bring back some fine memories.

A very evocative poem, you still have wonderful memories even if it does not exist any more.

Fascinating description of an era that doesn't seem that long ago to me.A perfect choice for the letter F.

How happy they had to have been, those who graced this Hall.

On behalf of the ABC Wednesday Team, Thanks for joining us this week. Hope to see you back next week too!

My grandfather was born in Hammersmith, - I'll bet if he had known they were going to build the Palais he would have stayed there and gone dancing instead of coming to Canada.

I can hear that Kinks song too. I'm pretty sure the Beatles played there early on.

I was way out in the boonies for the fifties fun, but I loved where I was, being a country girl at heart.

Even though I've never been anywhere near Hammersmith Palais, that does conjure up memories and images!

Aaah, something else I missed out on - we moved out of London when I was nine. A few more years and maybe I'd have been there!

Another great post for this week theme. I only smile how the dresses and dance movement evolves. Thanks for the post!

Thanks for sharing a bit of Hammersmith history!

Long before my time but I sometimes wished I had been a young adult in that era! I enjoyed your memories.