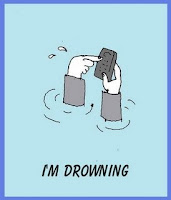 Gerald Gee
BLUE MONDAY
http://smilingsally.blogspot.com/
GLUG!
Sometimes, I imagine an era, way before our own;
The eighteen-hundreds I am thinking of.
And in some mysterious way I find a picture on the ground,
A picture like the one you see above.
To our modern eye this cartoon is as plain as it can be;
'A man with a mobile sends an SOS'.
Two centuries ago it wouldn't make a bit of sense
And I would only make a puzzled guess.
*
I'd know the man was drowning (well, it says so, underneath)
And death by drowning can't have changed that much.
But why does he point at an object at this most dramatic time?
He doesn't only point; he seems to touch!
It must be soap, I'd ponder, that he's holding in his hand,
But I'd find it odd that soap is coloured black!
So he must be in the bath! If so, the water is too deep,
For merely scrubbing arms and legs and back!
No not a bath! He's fully clothed! He must be in the sea!
But in the sea with soap and in his coat!
Maybe he fell off a liner when it rolled and pitched a bit
And now he's found out that he cannot float!
*
And so I'd ponder, gazing long at the scrap held in my hand,
But the answer never would be clear to me.
For how could I imagine the life we live today
And a joke concerning our technology!
* 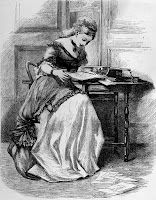 (And here I am, pondering!)
*
Another delightful Gerald Gee cartoon here:
http://rinklyrimes.blogspot.com/2009/09/in-flesh.html

See tomorrow's blog for some scarlet jewelry.
Posted by Rinkly Rimes at 7:39 AM

So true! just imagine what we will think of some picture that floated to us through time from say the year 2100!

You are very clever coming up with this neat and interesting showing for today. Great job.

Yes that is so clever.Have a nice day

Thanks for the chuckle. It's amazing how technology has changed our lives. Happy Blue Monday.

That was cute :) Happy Blue Monday!

With a little luck, the GPS feature would help locate him in the drink!

Very clever post. I'm not always sure I like how technology has taken over, but then, I'm not known for being "with it!" LOL!

That was cute and amusing! And very true, I'm pondering about it too. It's amazing how fast technology has taken hold of the world... It's not always a bad thing, but not always good either! We seem to be getting used to everything being automatic and instant and easy. And we might be missing out on "life" and "living." Don'tchathink? :)