I Told You So! 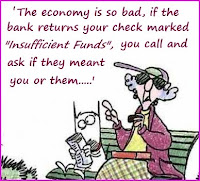 I TOLD YOU SO!
One of life's greatest pleasures is saying 'I told you so!'
And I've been known to say it once or twice.
The recipient of the dictum is usually not slow
In telling me they don't need my advice!
But one occasion stands out in my meagre little brain
And I feel the need to tell you all about it!
I knew the World Economy was going down the drain!
I told The World, but the World just seemed to doubt it!
*
It was two whole years before the crash; it all seemed hunky dorey.
A young aquaintance (business-man) was speaking
About the strength of economies, in their monetory glory,
And of the future wealth that he was seeking.
And a little old lady (that was me) piped up and said her piece........
'Maybe there's nothing there! How do we know?'
And the gentleman exulting in the worldwide Golden Fleece
Reeled back as though I'd dealt a body-blow!
'You're just a little old lady' (I paraphrase his words)
'It's much too hard for you to comprehend!
Businessmen do business over the heads of common herds!
But everything's all right, on that depend.'
*
Maxine and I, we ponder; we view the world and see
The human follies other folk ignore.
We have a natural grasp of international currency
We see 'the less' when others see 'the more'.
And now we view the carnage, and look very, very sage,
Watching coffers shrink when they were meant to grow.
One advantage, Maxine dear, of our, well, venerable age
Is the chance to tell the World 'I told you so!'
*
--------------------------------------------------------------------------------

'Geriatric'! That's the word!
Really! It is quite absurd!
Old externally I may be
While inside I am just a baby!
Isn't it a crazy thing!
Nature has a definite Spring!
Gardens don't mix-up each season!
*
Only humans commit this treason!
Letting Spring bloom in the heart
Despite each other Wintry part!
*

Love your Maxine as I absolutely despise bankers! Argh....

About aging, I like to think I am only as old as I feel!

Brenda, your poetry is unbelievable, so pertinent! Thanks for the Maxine laugh! :)

Hi!
I'll agree with Maxine on banks, they are a little sneaky. Love the poem. Have a great day!

A very timely Maxine, indeed. We can be deaf to the best of warnings.

I have enjoyed aging for the most part. The interesting part is how others perceive me and interact (or not) with me.