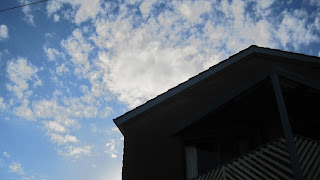 There was a time when rubies were the hall-marks of the rich,
When common folk could not aspire to own one,
When little girls like me had never seen a ruby stone;
We never thought that we'd be ever shown one.
The Bible mentioned rubies as the most desired of gems;
'Good wives' were 'rubies', so the Bible stated.
And no-one thought that anything so wonderfully rare
Could ever be, by human kind, created.
In those days fakes were frowned upon and treated with derision,
As they hung around the necklines of the poor.
And they looked so very glassy, and so vivid in their red
That people said 'Well! That's a fake for sure!'
But times have changed...... now we have 'bling' to brighten-up our days
And it's accepted by the high and low.
'Fakes' do not masquerade as something better than they are;
They simply shine and add a special glow.
I passed this local window with its red 'bling' on display
And I thought how very fortunate we are.
We can add a ruby lustre to our rather humdrum days.
Every one of us can be a bright red star!
*

Great post for the day as always, Brenda! Lovely clouds and lovely words to match! Hope you have a wonderful weekend!

I'm glad I stopped by for the treats you always have on offer - your poems.
Poetry must come very naturally to you as you must write all the time. Thanks for sharing it.

Did you write the poem? It's so lovely and contemplative. Your photograph's perspective is apt.
http://meeyauw-pad.blogspot.com/2010/07/skywatch-friday-451-driving-through.html

Brenda;) your sky image is excellent and I love the poem about the day ending. I've never like rubies (probably because I can't afford them -ha!) but they are beautiful and your poem, once again, says it all. Thanks for inspiring with your posts. Have a wonderful weekend. Jo