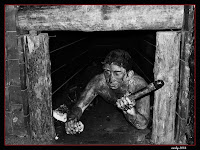 ELECTRIC SHOCKS!
A hundred thousand lightning bolts strike the earth, they say,
Every single minute of every single day!
*
Lightning kills a thousand people every single year,
Which proves to me that thunderstorms are something I should fear!
*
Six hundred and fifty volts are in the shock from electric eels!
And I refuse to test that and find out how it feels!
*
Electricity travels at the speed of light and messages from the brain
Reach the muscles faster than the speed of a speeding train.
*
Posted by Rinkly Rimes at 10:47 PM

Wow! The poem for the miners really touched a nerve there Brend! As you are fully aware the North East, where we live is coal country and many communities arose round the mines - there were so many of them and infact my Dad's dad worked down the pit! Fantastic poem, really really enjoyed it!

Brenda this gave me the feel of a passage from Germinal
I really enjoyed the first one a lot!
Pamela

Change! is a wonderful tribute, Brenda! My family is from a mining town in northern Minnesota. Your piece reminds me of some old mining songs I know. Very well written...made me want to sing. ha!

I really enjoyed your evocation of coal-rich Newcastle (I was there last week!). The multi-iambic lines gave it plenty of movement, adding to the idea of change.
ViV

Nicely written poem. To me it says one should never forget one's town's (or one's own) roots!

I am a history buff and thoroughly enjoyed the history lesson inside of your poem. Just finished reading a Baldacci novel with the plight of coal miners as its background. Your writing reminded me of so many things, thank you.

An interesting poem. Miners get little recognition and without their work at lot in our society would be different.

Interesting rhythm to the poem. Enjoyed this immensely.

You never fail to please! Your miners poem was really thought provoking and the lightening piece pure delight!

I enjoyed reading about the birth of your community. Coal miners do not have an easy job, and industry through the years has owed so much to them.

Oh I love this Brenda - My great grandfather was a coal miner :)