THE BEHOLDER'S EYE.
Beauty's in the eye of the beholder.
I'm not much taken with this type of art.
I saw this in a gallery in Sydney
And I wasn't too attracted from the start.
I think that it was painted for the Tourists
The Opera House looms large, so do the yachts.
The paint is heavy-handed and unwieldy,
Full of painted ridges, coloured dabs and blots.
But I realise that that's just my opinion;
Maybe this work has merit, who can say?.
Who am I to know what's worthy and what isn't?
We are all 'beholders', be it 'Yea' or 'Nay'.
* 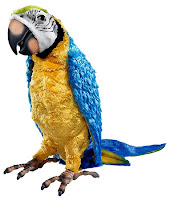 WORDY BIRDY!
Cindy went to a pet-shop and she saw a parrot there
And she rather liked the cute look in its eye.
'How much for the parrot?' she asked the Salesman, Joe,
And was quite surprised when he looked somewhat shy!
'I hardly like to tell you' he muttered very low,
'Percy here is going very cheap.......
He's only fifty dollars.' 'I'll take him!' Cindy said,
'Here's the money! Now he's mine to keep!'
'I must warn you' said the Salesman, 'That, although the bird looks good
His language is, well, fruity, for...you see....
He last lived in a brothel so he knows the ways of men
And that sort of..... you know.....hospitality.'
But his warning fell on deaf ears! Cindy liked the bird so much
That she took him home and took a cage as well
And she hung it in the kitchen where he sat up on his perch
Pecking his seed and tinkling his bell.
Percy looked at Cindy closely, making up his mind to speak,
Blinking his eyes and nodding with his head
And then he rather shocked her when he uttered his first words......
'I see you're a new girl, darling' Percy said.
But much worse was to follow. Returning from his work,
Cindy's husband ambled down the hall.
As he stepped into the kitchen Percy shouted out with glee
'My goodness me!
Here comes my old friend Paul!'
*
Posted by Rinkly Rimes at 6:44 AM