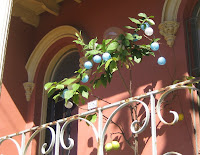 BLUE BERRIES!
Passing by I chanced to see,
There, on someone's balcony,
A very curious little tree
Decked with fruit of blue!
*
Something made me cross the street
Because it's rarely that you meet
Fruits that might be good to eat
And absolutely blue!
*
They were very blue alright,
But something wasn't really right!
They were left from a party night!
Those paper fruits of blue!
*
It was lanterns that hung there
Swaying in the summer air,
No wonder they looked rather rare!
Inedible..... but blue!
* 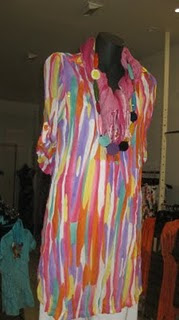 'One man's meat is another man's poison!'
I've heard that said and I'm sure that it's true.
This sort of pattern does nothing for me!
It may be the last word in fashion for you!
I remember the seventies! Weren't they just awful!
The things that we wore were devoid of all taste!
The obvious colours competing for dominance!
The bright repeat-patterns we gladly embraced!
And now they've come back again! Can you believe it!
The High Street's awash with the same garish stuff.
I've lived long enough to see hist'ry repeated!
But the seventies! Surely just once was enough!
*