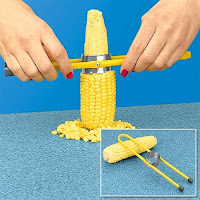 Almost every lunchtime when we sit down to eat
We enjoy some sweetcorn with the accent on the 'sweet'.
'What do you fancy for lunch today?' (lunches are Malcolm's task);
That is what he asks me, but he hardly needs to ask.
Cooked, briefly, in the microwave, with a little added butter,
Plus a little pinch of salt, and my delight is utter.
Little prong-things at the ends make eating civilised
But the fact that we're eating like cavemen cannot be disguised!
With butter dripping down our chins we hardly look sedate,
And there's scarcely one little kernel left when we finally clean the plate.
I found the pictures shown above when surfing in cyberspace;
I thought it a nifty invention but almost a disgrace!
Why cut the corn from off the cob? I'd like to make it clear
That there's nothing quite as tasty as corn-cob ear to ear!
*
-----------------------------------------------------------------------

NARCISSUS
The world of the ancient gods was a troublesome one indeed
For punishments were meted out ad hoc.
Yet there's always some psychology that lurks there in the tales
Making us consider and take stock.
*
Narcissus was quite beautiful, in body and in face,
The local girls all longed to be his mate,
But Narcissus was an egotist and loved himself the best;
This was the reason for his final fate.
*
A seer once told his parents that their son would surely die
If he ever saw his face in a reflection.
Rivers acted as the mirrors in those days of long ago,
So they steered him in the opposite direction.
*
However, one fine day the boy discovered a bright stream,
And he knelt beside it just to slake his thirst.
What should he see but a handsome face just gazing up at him!
And remember! That young handsome man was cursed!
*
He fell in love with the picture that was there before his eyes!
He'd never seen so beautiful a sight.
He gazed and gazed at perfection with great longing in his heart,
All through the day and by the moon by night.
*
He forgot to eat! He forgot to sleep! He forgot to close his eyes!
He forgot to take a walk or take a rest.
All he could do was worship the dear object of his desire.
Today we'd say that he was quite obsessed!
*
In the course of time he weakened; he grew frail and pale and weak;
Yet still he gazed in utter adoration,
He never knew he loved himself, not even at the end,
When Death became the final tribulation!
*
A little flower, narcissus, sprang up in the place he died,
As a memorial to his lovely face,
It grows there by the water to remind us of a youth
Who had everything........but ended in disgrace.
*

And they are still among us; the Narcissists are real.
Self-love is good when taken in small doses.
But when it's overwhelming to a pitch beyond the normal
We say that Narcissism's called neurosis.
*
Posted by Rinkly Rimes at 8:15 AM

I like your take on narcissism. Corn on the cob makes for a perfect lunch and yes, dripping with butter. My Mom used to add that special touch with sugar as well. Yes, it can be a dessert.

You are so right re eating corn - on the cob the only way.

wow, nice gadget. Good idea to prepare this sweet corn. thanks for sharing.

A nifty, ringing corn poem and your Narcissus poem is beautiful!

A poetic like you is great. Nice one. happy MYM!

It is a cool gadget for the corn on the cob. Beautiful poem.

would be so easy to fix fresh fried corn with this