BRY ANTICS
October 25th
This has been a very busy but enjoyable week. Newcastle itself seemed to buzz in one way or another.

The first ship of the Cruise Season arrived.

Andre Whats-his-Name did his thing at the Entertainment Centre. 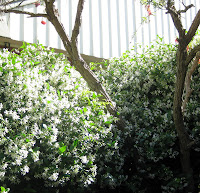 And Spring sprung. This is our jasmine literally breaking the back fence and smelling great.
SUNDAY was a quiet day and on MONDAY things were pretty routine; the Probus Committee Meeting which is always pleasant, and the Choir Practice, during which we had to manage without our conductor, who had flu.
We had to manage without her on TUESDAY too, and we made one or two mistakes. These upset Lois, our pianist, but audiences seem to like them! 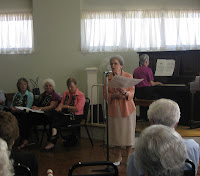 One of the audience members wanted to sing-along. It was her last day with the group too.
In the evening we went to Caroline's for the Book Group meeting. I only managed to get the book, 'The Brain that Changes Itself' a day or two before so I could only comment on one or two chapters. It's utterly fascinating too so I'm going to finish it. Caroline has an unusual house with very high ceilings. I took the photo below half-way up the stairs.

Book Group in session
On WEDNESDAY I organised an extra Scrabble session because Sharon, our member who is still recuperating from a bad accident was so sorry she missed it last week. However, the afternoon wasn't entirely successful, because Sharon, who's still unsteady on her feet, fell and cracked her head on a table! We were all very worried but she recovered quite well.
THURSDAY dawned rather grey but it turned into a beautiful day for our trip up to the Lower Hunter. 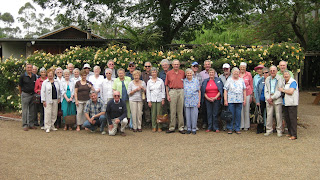 I was appointed official photographer for the day but I snuck into this one, cuddling Fred!
We had morning tea at Rose Cottage, and then we visited a typical country museum, which contained some nostalgic artifacts for all the country girls in the group, but which could have been displayed to much more advantage. We had a lovely lunch and then rounded off the day with a visit to some Water Gardens. It was a nursery really, but only for water-lilies and other such plants. This was the best part of the day. I just wandered in the park-like grounds.
We had a good time on FRIDAY morning, performing one of my melodramas at the local Coffee Pot Club. The whole thing is utterly amateur and ridiculous but as you can see from the shot below 'a good time was had by all'. 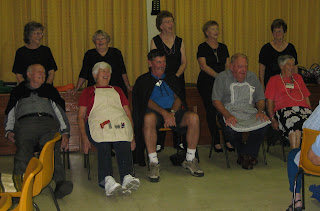 The 'puppets' and the puppeteers!

On SATURDAY the week dipped. We had to attend the funeral of an old friend. I hadn't seen Roma for some time but we used to be in a Writing Club together, and I acted in one of her plays a few years ago. She was a remarkable person; a writer, painter, activist for the Labour Party, great party-goer, always immaculate and pretty. I don't think I've ever known anyone embrace life quite like Roma. The funeral wasn't religious; in fact it was a 'show'. All her favourite songs were sung; people said poetry. There was lots of laughter and applause.The photo below shows Roma as she appeared in a play not long ago when she was already well over eighty. She died at 87, a performer to the end. I left the crematorium feeling happy. 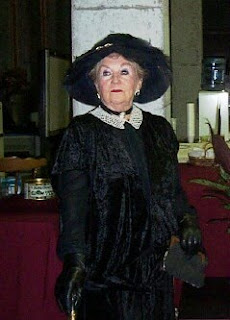 Roma Duff
I mustn't forget to add yet another piece of good news for the Bryant Family. As I've already said, Rebecca has left the Income Tax job (H&R Block). On the very day she resigned the Government announced a plan for collecting income tax without involving agencies! How lucky can you get!
Till next week.
Brenda

The jasmine looks great - I would love to have had that in my garden when I had one. Is it a vine or a bush because the abundance of flower, not the colour or the shape, reminds me of honeysuckle.