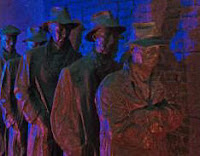 The Great Depression
CARRY ON TUESDAY
http://carryontuesday.blogspot.com/2009/10/blog-post_17.html
This week we have been asked to adapt the following:
the opening line from 'The Great Gatsby' by F. Scott Fitzgerald.
'In my younger and more vulnerable years my father gave me some advice that I've been turning over in my mind ever since'

HISTORY REPEATING!
In my younger and more vulnerable years my father gave advice
That I've been turning over ever since.
For I've been forced to think of it far more than once or twice
Though, at the time, his wise words made me wince!
My father said 'Be a teacher! They're never unemployed!
In a Depression there's always work to do.
(I think he saw me bridle; I was really quite annoyed.)
' Jobs a that time were like diamonds; there were very few.
Why! I worked right through the thirties! I was never on the dole!
I took a cut in pay but that was all.
We always had enough for meat and rent and bags of coal,
While many workers' backs were to the wall!'
*
'Depressions' I said 'Were in YOUR time! This is nineteen-forty-nine!
There's so much work about we have a choice.
We modern people know that we have worked things out just fine!'
(I think a touch of scorn was in my voice!)
*
Still, I became a teacher as our parents' words were law,
Though I didn't really think of it 'for life'.
'Something else in the future' was just clutching at a straw!
(I'd be a famous writer or a wife!)
And teaching was quite pleasant. Why! I even had a flair
And many days were way, way more than 'nice',
But I sometimes felt a niggle for I felt it wasn't fair
That I'd been given so much dud advice.
*
But last year came the Credit Crunch and things were looking bad
And unemployment loomed, and jobs were few
And I said to my teacher son (an echo straight from Dad............)
'Teaching is great! There's always work to do!'
*

Nowadays it is join the Peace Corps, do community service....it is a good thing to do while you are waiting for that much needed job!

Laughing here! I relate! I am a high school teacher and was given the same advice!

I have wished many times that I had become a teacher. If my father had given me that advice I wouldn't have listened to that either.

Am glad you listened and felt good later on. Reminded me of my Granma's saying that its always a lil bitter in the beginning when you eat a gooseberry but then in the end it turns out to be really sweet.

Loved reading your write, as always.

The great gatsby was one of my Lityerature text book in the 6th form. Myteacher wasn't very good and I didn't fully understand the book, I still don't. Guess I be my own teacher and revisit the book.


Did you try to do some writing as well?

I too am a teacher though I went a round about way. Kids are great, I love them.

Wisdom comes in many forms...one of it through our parents. Great wise words from a man of wisdom. Teachers never run short of works to do.