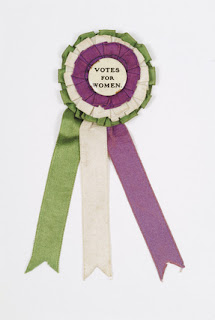 'CAUSE'
and
FRIDAY FREEDOM
http://memeexpress.blogspot.com/2009/10/friday-freedom-49.html

I always just accepted the fact that I would vote

And that, some day, there'd be females up there Captaining the boat.

And so she never took her own equality for granted.

When females were the second sex and over-ruled by men.

And I don't suppose she really understood the great enormity

Of ladies speaking up at last and rubbishing conformity.

She only knew that ribbons were available to wear

And they were worn by all the female pupils that were there.

No doubt a lot of ribbing from the schoolboys came their way,

And no doubt the chatty little girls had quite a lot to say.

They didn't realise that they were part of an upheaval,

The overthrow of ideas that were, frankly, medieval.

My Mother told of the great pride with which they wore rosettes;

It was not the sort of frippery a little girl forgets.

But for Mrs Pankhurst and her clan this was no merry time;

Their firm stand for equality was treated as a crime.

Imprisonment and death were theirs'; the price was theirs' to pay

To give us all the freedoms that we all enjoy today.

Did I say 'All'? No surely not! There are times that one forgets

That we have sisters overseas who still can't wear rosettes! 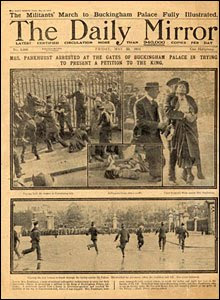 Mrs Pankhurst presents a petition and is arrested. 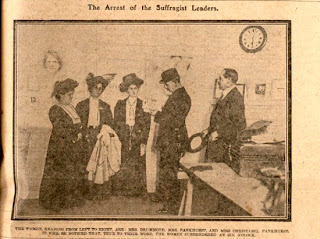 A different sort of rosette here:

Until we read of the bondage of the women in the mid-east we forget the freedoms that our mothers and grandmothers fought for. We take the vote for granted and we really shouldn't.

A most excellent, interesting and entertaining blog today for the 'cause'!!

My Tuesday post is now published, come over if you can find time.

An excellent cause that still needs our support.

We certainly should not take our right to vote for granted. How soon we forget what others fought for.