BRY ANTICS
October 4th
Not the cheeriest of weeks this week. The news was dominated by the awful disasters in our area. There are many Samoans and Indonesians in Australia, and the Pacific islands are favourite holiday spots for us, so there were a lot of personal tragedies reported locally. Oddly enough, it is the Australian Plate that is moving northwards and 'bumping into' other plates that is causing the problem. I say 'oddly enough' because Australia itself is very stable, although tsunamis are a possibility due to the close proximity of the 'restless' areas. No doubt our population, which reached the mile-stone of 22 million this very week, will be boosted by needy islanders in the future, as water-levels rise.
On SUNDAY winter surged back! September seemed just like mid-summer, but the weather is less settled now and we've actually had some RAIN! The temperature dropped below twenty degrees and we all shivered. When the boys came round, as they usually do at the weekend, the begged for us to turn on the electric fire! Here they are enjoying the warmth! As you can see, their temperaments are very different! 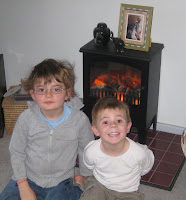 On MONDAY we climbed out of the doldrums a little as we went out to lunch with friends. Both Faye and I had a spaghetti dish and we wrestled with stray 'spags' as one always does! I tried to snap Faye in 'dribbling mode' but I missed. 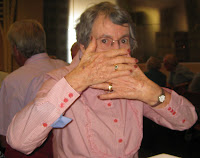 A coy Faye.
The evening slipped back into disaster mode, though! Becca had won two tickets to a new film 'Mao's Last Dancer' and we set off to what was supposed to be a Gala Performance and preview. On arrival we were told that we'd been told the wrong venue! On returning home I discovered that a friend had had her email address hi-jacked, and we spent some time getting through to England and then America to try to sort things out. This was not the evening we expected to enjoy!

TUESDAY was a sad day as we had to attend the funeral of a friend. Elaine and I weren't close, but we'd belonged to the same club for nearly a decade and so knew each other well. The church was packed. Most of my friends have lived in Newcastle all their lives, having brought-up children at the same time, so there was a large congregation. Our choir sang, but I had failed to wear my uniform so I didn't join-in. (I did tell you it wasn't much of a week, didn't I?)

One corner of the church.

There was a mix-up on WEDNESDAY as some members of the melodrama group became confused about rehearsals and failed to turn-up at Carole's for a practice. (Our routine had been disrupted by the funeral.) However, with only four of us there we managed to have a useful session, recording the 'Pirate' songs. And THURSDAY was another flop! We decided to buy a new, larger, TV and we drove a considerable way to Mount Hutton to get it as it was a bargain. When we got there they were sold-out! (We've ordered one.) I didn't even have my usual Becca-and-Max day as Blake had been away at camp and his parents had been out of town collecting him! And the play rehearsal on FRIDAY wasn't the best, either!!!!!!


SATURDAY was a mean-spirited day, with squally, cold rain, but I had Harry for a lesson and he was gorgeous. He's just had an excellent report from his pre-school saying that he's matured into a very sensible, pleasant and hardworking boy, so this was great. As some of you know, he was hardly the easiest of toddlers! In the evening we would have preferred to stay at home but we'd committed ourselves to a night of amateur theatre at a local church hall! It turned out to be quite pleasant with a home-cooked meal provided and the farce 'Wanted! One Body' was the usual harmless fare. But I found myself next to Caroline, one of my favourite people, so that lifted things a lot.


But, on the whole, this was a drab week and I hope things are going to improve!