Two little children dominated the news this week! The one was the Helium Balloon Boy. That was all very awful at the time, but I'm a bit dubious about the family, aren't you? 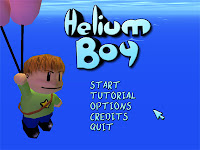 Something not quite real!
The other was the near-disaster that occurred on a Melbourne railway station. That was, by comparison, all too authentic. For anyone who doesn't know the story, the mother let go of her pram in order to hitch up her slacks and the pram rolled under the in-coming train! Luckily both the children involved in these two 'dramas' are alive and well today.

Caught on video!
The Australia-wide drama this week has to do with Boat People. Like most Western countries, we are a target for asylum seekers. Our numbers are quite small, but our arable land etc is limited and we already allow-in thousands of legal immigrants a year anyway.The dilemma, at the moment , is whether to allow-in a boat-load of Sri Lankans who all fear for their lives, knowing that, if we do, hundreds more will set sail, some drowning on the way, and all earning big money for the crooks who run the schemes.

Refusing to leave their ship in Indonesia.
My own week was dominated by great news from Rebecca, our daughter. Here is the most recent photo I have of her.

Rebecca
Ever since Brian, her husband joined the Fire Service, she has hoped to find a job with easier hours. Having two people in one family with erratic hours has proved difficult, although she has always loved her Income Tax job. Now she has been offered a job with flexible hours and fabulous working-conditions, and she starts next week. Last week I was thrilled with our son's changed circumstances! This week it's Becca! I think I should have bought a lottery ticket!
The early part of the week was fairly routine, but enjoyable. On MONDAY we had a pre-Christmas Choir Practice, which we all enjoyed. We sing some Australian carols about the summertime!
On TUESDAY I had an all-day rehearsal for 'Pirate Pie' at my house and I was absolutely thrilled with the way it went.We ran through the play twice before lunch and once afterwards and I've cancelled all other rehearsals because I was so happy with the result! Of course, there was too much food! Do you have 'Bring-a-Plate' in other countries? It's common here and everyone comes prepared to feed the five thousand!
WEDNESDAY was the monthly Scrabble Day. Only four other players turned-up because of a mix-up over the date, but we had the usual session of 'garrulous' Scrabble and put the world to rights between moves!
THURSDAY was quiet until evening so I was able to work on plays for next year. But, in the evening it was all go-go-go as our daughter-in-law had her impacted wisdom teeth removed at the hospital down the road. There was no drama about her operation which went well, but the patient ahead of her had problems, and so it was late evening before she was operated on! As Greg had his two little boys to look after, Malcolm became involved, and the phone was buzzing.
On FRIDAY we had a rehearsal at Betty's house for 'Jewelled Jeopardy'. Once again, all went well and then the afternoon relaxed into a refreshment break, which involved wine. You can see the hostess in the photo below. She's the little one in the white shirt next to Pam, who's on the arm of the chair and wearing blue. 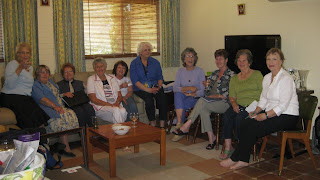 The Merry Mellows
But SATURDAY topped the week! It will be Blake's eleventh birthday next week and we had the family party today. We had a barbecue at the Lake, at a place called Swansea, and conditions were ideal. 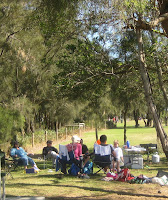 It was a lovely shady location. 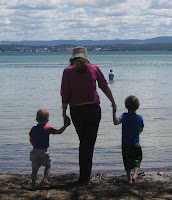 Max and Harry enjoyed the water.

The pelicans and seagulls enjoyed our barbecue as well. 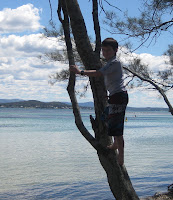 Of course, Blake was top of the tree! 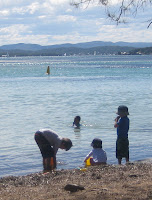 Everyone had a wonderful time.
Till next week.
Brenda
Posted by Rinkly Rimes at 10:11 PM

I certainly enjoyed that. :)

You seem to be living under a charmed star this week. I hope your good luck continues for many moons.

We call our "bring a plate" a potluck dinner. Everyone brings a dish to share. If you don't assign the type of food to bring to each person though you can end up with all salads and deserts and no main courses.