Some people say we should speak of Climate Change rather than Global Warming and I think that's right. We had an August which was just like summer and now winter has come surging back. It's been cold and wet all this week and there's more to come. Of course our weather hasn't caused the havoc that's been recorded in Asia. Funnily enough it's the Australian Plate that's caused the trouble, moving north. But we're sitting on it, rather like passengers, and earthquakes are very rare here.

A storm of another kind hit our shores as well. Evidently there's been a lot of controversy over a TV show which showed actors in black-face. I didn't see the show and snippets on the news have shown it to be rather unfunny and tasteless. But Australians have been amazed at the furore. It was a commemorative 'talent' show harking back to the fifties and sixties for one thing and, for another, the actors were Indians and Pakistanis, most of them doctors! There's no doubt we're not as sensitive about our backgrounds here. We're often called Poms in an insulting manner, since we've got English accents. The inference is always that we don't wash!!! Our Aborigines are either part of the mainstream and treated as such, or still living in their chosen outback state. I've never seen them lampooned. I used to love an old show called 'The Black and White Minstrel Show' and I don't remember ever having racist feelings about it. Finally, I think everyone is a racist, in that all of us prefer to be the colour we are, including African Americans. Enough of that but here's the show in case there are people who don't know what I'm talking about! 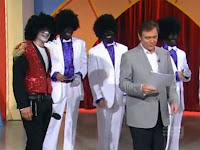 The Act in Question

Another local case upset me far more this week. A father was accused of stopping his car on a high bridge and throwing his four year old daughter off the top to get back at his wife! She died, of course. At the trial it came out that his eight year old son, sitting in the back seat, had said 'Please go back and get her, Dad. She can't swim.' I found this unutterably sad and horrific. I've had it on my mind all week.

Then there was Barak Obama's Peace Prize. Like a lot of other people I have great hopes for his future successes, but I think they are in the future. And I felt it was unfortunate that he received the award on the day he was deciding to send more troops to die in Iraq.

On SUNDAY Rebecca and I went to see 'Mao's Last Dancer' which we both loved.I thought it was very well done and I wasn't the only member of the audience to shed tears at the ending! It was very true to the book too.

On TUESDAY we had our final rehearsal for 'Unhand Me' ready for the performance on Friday. And on WEDNESDAY, which was damp and cold, I stayed in and wrote. Our melodrama group is going for a government grant next year and I'm working on a melodrama which includes items suitable for Seniors' Week! Not that easy! I worked on it again on THURSDAY.

FRIDAY was a more exciting day. We performed 'Unhand Me!' at the Marylands Club and it was a great success. Unfortunately, Malcolm's video of it got messed-up in the downloading so there are no photographs of our success. We all went out to lunch afterwards in very high spirits.

But the day was even better than that! Greg came round in the morning and told us both to 'sit down'. Of course I feared the worst. But it was to tell us that he's just sold his house for the asking price to someone who happened to be walking past! How's that for serendipity? But there was more to come! He then said 'I don't know how you'll feel about this but we're renting the house next-door to you till we find another house'! How did I feel about it?? Fantastic! He thought we might feel too close! What a flurry of excitement!

On SATURDAY I read jokey poetry at the Breast Cancer Pink Afternoon Tea. That went well too. I only read three poems, but I got a lovely bunch of roses, and a gift for my trouble. We all wore pink and really enjoyed ourselves. I got some good shots this time. 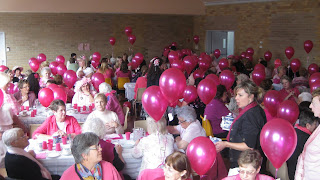 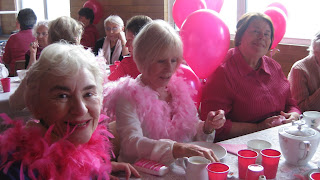 Jane, Barbara and Jan, boas to the fore. 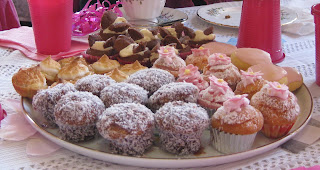 Calorific!
Till next week.
Brenda.

Yes, I like the term 'climate change' too, because that is what it is. Global Warming suggests cause but not effect. What a horror story about the little girl, and the little boy and mother who have got to live with what Dad vengefully did. It upset me as you wrote about it and it still upsets me. The pink balloon picture is great, which reminds me I have to post something about recognizing breast cancer month soon.