Yet they may be the answer to it all.

Well, not the purple woolly-worm of the central part, perhaps,

Those are called the telomeres, they're found on chromosomes,

And a chromosome is smaller than a cell!

So don't go looking for them (don't do a Sherlock Holmes!)

The human eye can't cope with them too well!

There are tags on all shoe-laces, as everyone's aware;

Well telomeres are something of the same.

They regulate how often a cell can face repair

And the time is finite! Isn't that a shame!

After a while they shorten! At last they disappear!

The cell just dies and that's the end of that.

That is the cause of death, my friends; sorry to make that clear!

It's true of human, whale and mouse and gnat!

But there's a certain type of cell that never, never dies;

It keeps repeating on  and on and on!

The cancer cell is clever; it's been able to get wise!

Left to itself, it never would be gone.

But now the patient scientists have studied for some years,

And they've concentrated on the clever trick

Of the cancer telomeres, some of which (the little dears)

Cause humans to become so very sick!

They're discovering the secret of Eternal Life (no less!)

If they find it we may all live on for ever!

But think! Eternal Life may end up as Eternal Mess!

Sometimes it seems we can be far too clever! 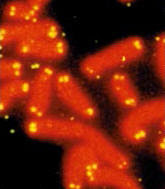 Best biology lesson I've ever had!