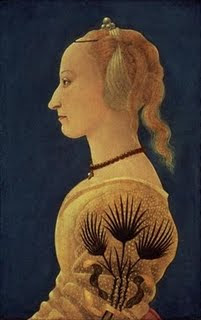 THE LIKENESS
I begged him not to paint my profile; I know it's quite severe!
I've only one good feature, and that is my left ear!
He drew the hair around it so it wasn't even seen!
He said it was a hairstyle that was favoured by the Queen!
I really look quite pretty from the front! I really do!
Though my nose is not my strongest point; I must admit that's true.
My neck is rather lovely, though; you must have noticed that,
And the way my hair is organised in a sort of curly plait.
My eye-brows have been shaped quite well; they arch quite pleasantly
And notice my jewels! How they show I'm from high society.
My mouth looks grim! Well, wouldn't yours, if you were in my shoes!
Nobody pays the slightest heed to the youngest daughter's views!
Mother chose the outfit. She said embroidery was 'in',
And when Mother makes her mind up I know she's bound to win!
*
Well, I only hope 'he' likes it, whoever 'he' may be.
They're sending him this picture so 'he' can study me!
And if he likes the look of me I'll travel to his side
And whether I care for him or not I'll have to be his bride!
*
They tell me in several hundred years women will have a say
In whom they have to marry! They won't have to obey!
And there will be an invention called 'plastic surgery'.
Oh well, that information isn't much help to me!
*
Another form of portraiture here:
http://rinklyrimes.blogspot.com/2009/04/black-and-white-magic.html
Posted by Rinkly Rimes at 6:41 AM