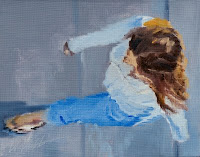 SERPENT
Forty thousand years ago ( or, maybe, more than that,)
The great Australian continent lay like a large red mat.
And the Rainbow Serpent stretched himself and thought he would set forth
To find the people of his tribe, a long way to the north.
His name was Goorialla and he slid across the land
Because he had a great re-union planned.
He travelled to the farthest north but his people were not there,
So he marked the place with a mountain where the land was flat and bare.
He called it Naralullgan and then he slid away;
His tribe was not up in the north and so he could not stay.
But as he moved he left a gorge and streams and rivers too.
His was a mighty magic; there was nothing he could not do.
The mountain, Naradunga, made of granite, rose on high,
And another, Minalinha, he made as he passed by.
Then he heard some people singing and he recognised the song;
He knew this was the tribe for which he'd travelled for so long.
For a while he watched the Bora as festivities progressed,
But he saw the dancers moves were wrong and they weren't correctly dressed.
So he came out of his hiding and as soon as he came out
He was greeted with a loud and joyous shout.
He told his people how to dance and the clothing they should wear,
But, suddenly, a mighty storm came out of the evening air.
They quickly built two humpies to shield them from the storm,
Places where they could all be safe and warm.
One humpy was for the Serpent, the other for the rest,
For the Serpent was their most respected guest.
Now the peoples' humpy was too small; two boys were left outside
And they stood there in the pouring rain and bowed their heads and cried.
'The Serpent will give us shelter!' the boys were heard to cry;
'He'll let us in and we'll be safe and dry!'
The Rainbow Serpent let them in and then, oh woe is me,
He opened wide his ghastly fangs and swallowed them instantly!
As soon as he'd done this evil deed he knew he must be gone
For, in the morning, he'd be set-upon.
Came daylight and the boys were missed, while the snake was far away,
It truly was a very sorry day.
The Rainbow Serpent never came to their camp-site again,
But they see him arched across the sky ...... always after rain.
*
Posted by Rinkly Rimes at 6:56 AM

LOL :D One sandal too less for him? ;) Hilarious, Rinkly! :D