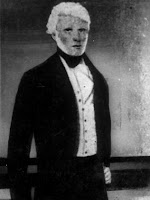 Solomon Wiseman
GHOST!
Solomon Wiseman was a rogue, working for him was stressful,
Though you find yourself admiring him for being so successful.
Many convicts worked for him, often for seven years,
Having to cope with the lashings, the insults and the jeers.
One man, let's call him William, had completed four years at last,
Four years of deprivation were, happily, in the past.
A remark about 'good behaviour' was noted on his report,
So a ticket-of-leave was justified and a ticket-of-leave was sought.
William wanted to see his sweetheart, who lived in Sydney Town,
So he plucked up courage to ask for it and Solomon turned him down!
He not only rejected his pleading but punished him as well
By putting him under an overseer whose methods were pure hell.
William was put on a road gang, with leg-irons to hold him fast.
But against all odds William got away. Though I fear the die was cast.
He tried to swim the river, but the leg-irons with which he was bound
Were much too weighty for swimming and William, young William, drowned.
Those leg-irons are still heard clanking, or so the locals say,
A message from young William, who failed to get away.
*
------------------------------------------------------------
PS
This P.S. is somewhat delayed as I had a spot of curious computer trouble yesterday. My internet connection failed! I rang Daniel (my expert)﻿ and he told me to switch everything off and leave it for ten minutes! And lo! It did the trick! I'd been switching off for only a very short time. But why should the length of time make a difference? It's all a mystery to me. 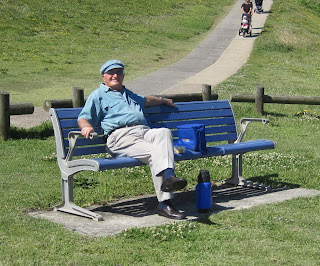 Anyway, on Sunday we enjoyed our first summer picnic tea as the weather was superb. Maybe 'enjoyed' isn't the right word as Malcolm is just about to discover he's left the tea-bags at home! 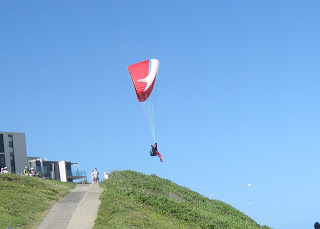 However, we were entertained by a para-glider having countless tries at getting started. Here he actually succeeds!
Posted by Rinkly Rimes at 6:15 AM