I once wrote an ode to a dahlia,
Admiring its lovely regalia,
But my poor little ode
Wasn't quite a la mode
And it ended up being a failure.
*
See my blog for 11/1/10 to learn more about this aphabetical meme.

Onomatoepeia! What a most exciting word!
I find I use it almost every day!
And there are more examples that, as yet, I haven't heard!
And most of them are such great fun to say.
I'd be loudly shouting 'Tuxtax!' if I lived in ancient Rome
Intending to give someone else a whack.
I'd be saying 'Dokidoki!' if Tokyo was my home
And I was speaking of a heart-attack!
Take the truly great example that's illustrated here,
Say 'Splat!' and then it's there, in your mind's eye,
It could be a well-aimed snowball that smacks one on the ear,
Or a fly-swat that gets a passing fly.
And think of all the animals whose voices we portray
In simple words that get the sound off-pat.
There's the 'Woof-woof!' and the 'Quack-quack' and the 'Oink-oink!' and the 'Neigh!",
And don't forget the "Meow!' of the cat!
I think all language started with an imitation sound;
A caveman must have instituted 'Plop!'
And other people liked it and so it spread around.
Goodness gracious, is it ever going to stop!
*
------------------------------------------------------------

I usually publish photos that flatter me (I'm sure I'm not the only one!) but I thought I'd be honest tonight and show you a shot of me and 'my' cast in the play I've put on this week. The young people are so photogenic that I look even worse than usual! 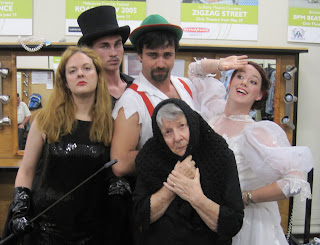 can we read that ode, Rinkly? maybe it wasn't such a failure as u thought ;)