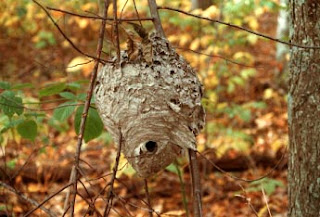 This week we had to choose a title from the New York Times Best Sellers List.
I chose
THE GIRL WHO KICKED THE HORNET’S NEST
by Stieg Larsson

The girl who kicked the hornet's nest was surely ill-advised!
When they flew out and stung her, why was she surprised?
That she was in a nasty mood just cannot be denied,
But it would have more sensible if she'd sat down and cried!
So Archie Tonks had turned her down! There are worse things for sure!
For after all, poor Archie Tonks was something of a bore!
So she couldn't go to the Prom that night? Her pretty dress was wasted?
She wouldn't meet the other girls? The wine would not be tasted?
But why dash into the forest as though by fiends pursued
And find a hornet's nest to kick? Her attitude was skewed!
For millions of hornets swarmed about and stung her on the face!
The knees and arms and nose and chin and every other place!
She fled home wailing bitterly, in terrible distress,
Looking scarlet and blotchy, in fact an awful mess!
She looked exactly like a clown! She'd stay that way for days!
She staggered up to her front door in a very painful daze!
Mother met her at the door and suggested embrocation,
But her words were not inclined to help in easing the situation.
'You've had a call' said Mother; said the girl 'Who was it from?'
'From the Captain of the football team! He wants to take you to the Prom!'
*
---------------------------------------------------------

Greg and Michelle had reached a stage when they wanted to be married.
But NOT overwhelmed by marriage plans, bullied, cajoled and harried!
So off they went to do the deed on the island of Fiji
Where they stayed in a luxury cottage with their own beach, by the sea.
My son took this peaceful photograph of their Island Paradise.
They were married right there on the beach.
With nobody throwing rice!
*
Posted by Rinkly Rimes at 6:27 PM

Song of the Rose
For Zeus chose us a King of the flowers in his mirth,
He would call to the rose, and would royally crown it;
For the rose, ho, the rose! is the grace of the earth,
Is the light of the plants that are growing upon it!
For the rose, ho, the rose! is the eye of the flowers,
Is the blush of the meadows that feel themselves fair,
Is the lightning of beauty that strikes through the bowers
On pale lovers that sit in the glow unaware.
Ho, the rose breathes of love! ho, the rose lifts the cup
To the red lips of Cypris invoked for a guest!
Ho, the rose having curled its sweet leaves for the world
Takes delight in the motion its petals keep up,
As they laugh to the wind as it laughs from the west.