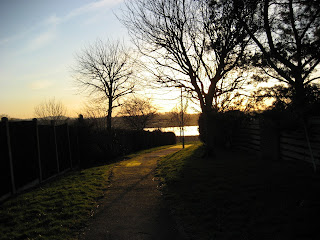 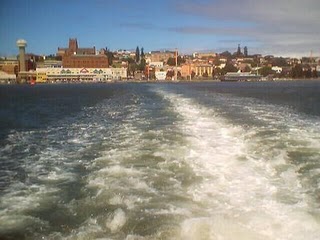 Over the Hunter River the little ferry goes.
It's back again before we can say 'Boo!'
And we like to look back at our town as it strikes a gracious pose
And you'll never find us tiring of the view.
Here we see the wake that's always streaming out behind
And the buildings of our very favourite city,
Though we take the journey often it's for sure we always find
That the scene is very tranquil, very pretty.
Journeying to Stockton can take a while by road
And the ferry lets the wind blow in our hair;
All commuting workers make quite a heavy load
But the little ferry never seems to care.
The inhabitants of Stockton tell quite a hairy joke
But then of course they are inclined to tease.
'Of course' one says 'I'm better than a lot of other folk;
I'm from Stockton;
I have come from OVERSEAS!'
*
Posted by Rinkly Rimes at 1:54 PM