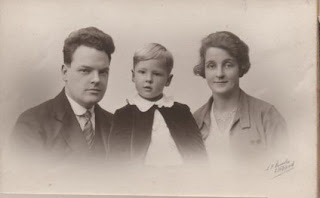 ECHOES
Just a faded photograph from many years ago,
Not of close relations, but people I used to know.
I knew them in a way that is, in many ways, quite rare,
And it makes me feel nostalgic, to see them posing there.
I was their 'little evacuee' in nineteen-forty-three.
For several years I lived with them and they looked after me.
They were Mr and Mrs Tucker; no first-names in those days!
And they were very kind to me in many, many ways.
This photograph was on display and it often caught my eye;
I'd study Trevor, the little boy, whenever I passed it by.
When I knew him he was fourteen; gone was his babyhood
But I always liked this photograph; little Trevor looked so 'good'.
Trevor's an old man now, of course, for seventy years have passed!
I'm just a wee bit younger, but I'm catching-up too fast!
Now we correspond by email in a very modern way,
For I am in Australia, and he's in the U.K.
Both of us have descendents, so our genes will carry on
After the inevitable, when both of us have gone.
All this will be ancient history, and will anybody care
That once I lived in Stafford and was kindly treated there?
Thank you Trevor for the photographs and all the memories.
Some of the happiest things in life are echoes such as these. 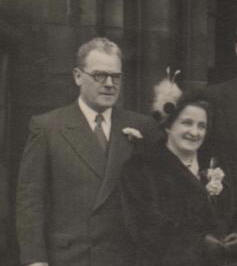 Mr and Mrs Tucker about ten years after I lived with them. 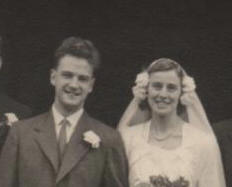 Trevor at the time of his marriage to Margaret. 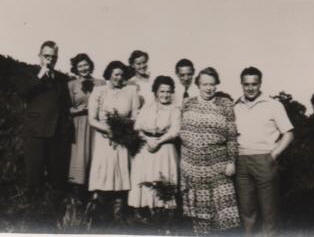 And an unexpected bonus! A picture of me with the family (second from left) that I had never seen before!
Posted by Rinkly Rimes at 6:34 AM

lovely memories- and the photos are super- thanks for letting us see them!

What wonderful memories of very wonderful, gracious, good people. It is so wonderful to have the old photographs, isn't it.

Delightful. So many stories from back in those days (when I was born) lol