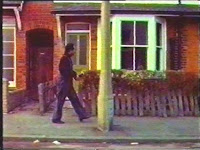 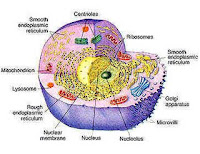 NUCLEAR FIZZICKS!
You have about ten trillion cells, well, give or take a few.
All of them involved in making you the unique 'you'.
I celebrate the Nucleus, the centre of the cell,
For there sits a powerful memory bank which serves you very well.
Imagine the size of a Nucleus! It's beyond our comprehension!
Our minds cannot cope with things with such a small dimension!
If we could make cells large enough to cover a whole city
We'd see how intricate they are, but we can't and that's a pity!
The Nucleus has a nucleolus lurking deep inside,
And that deals with the ribosomes. I think they're modified.
Ribosomes deal with synthesis; they appear to float about!
Some are inside the Nucleus and some of them are out.
'Smooth endoplasmic reticulum'! A rather tasty phrase.
I think it just means 'stuff' myself, but it helps in many ways.
Other things float inside it, like cherries in a bun,
One of them's mitochondria; now that's a clever one!
Mitochondria make energy, and help us run around;
Mitochondria are rod shaped but circular ones are found.
There are many more bits and pieces, too many for my brain,
I merely 'Googled' all of this to set this verse in train.
There's more! Three hundred million cells each day curl up and die!
How do we do without them? How on earth do we get by?
That's three hundred million Nuclei lost and gone for ever!
I fear for my poor addled brain it's all a bit too clever!
I've lost so many nuclei just working on this verse
That I think I'll have to put the whole darned process in reverse!
*
Posted by Rinkly Rimes at 4:14 AM

While I like all of your poetry, I think Nuclear Fizzicks is the cleverest one yet. The title is funny and the poem is a neat way of using facts to write a cute poem.

Another rinkly smile from you. I look forward to them but I'm likely to get wrinkles in the corners of my eyes. Well--truth be told, I already have them.

that's nice...Gandhi once said "an eye for an eye makes the world blind"...

wow...i loved them both...your poems have the ability to make me laugh so much..loved it..

howz the labor suiting u both, Rinkly? ;)