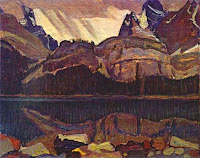 There was a young fellow called Jake
Who went for a row on a lake;
He stood up and he clowned
And fell in and drowned.
So that was an awful mistake!
*

See my blog of 11/1/10 to learn more about this alphabetical meme.

Now an oldie for good measure.

Isaac Newton looked at light,
Didn't say 'Well, well, that's bright!'
He observed that light was colour!
(We have brains a great deal duller!)
Other people, off the mark,
Saw just boring Light and Dark!
He took a prism (illustration)
And sought to give a demonstration.
Rays, through the window, from the sun,
Showed light-splitting could be done.
Sure enough, on the opposite wall,
He saw the rainbow colours fall.
'But', said observers 'It's the prism
Doing it all!' Such criticism
Spurred him on more than a bit!
He made a screen with a tiny slit.
This, as the clever man suspected,
Caused only green to be reflected!
Then he reflected only blue,
Followed by every other hue.
He'd proved his point and that is why
When we look at a rainbow in the sky
We realise light's refracted! Right!
Raindrops are prisms splitting light!
Without that amazing Newton brain,
We'd never have thought of suspecting rain!

I very much enjoyed your poem about rainbows, prisms and rain.

love both lake and light,

The Light poem was absolutely fascinating!! Totally dig those rimes!! :)) So beautifully you have written a scientific observation here....AWESOME!!!!!!!!!! Very very impressive!

I'm not even crazy enuf to go on a lake.. scary limerick, though fun :)