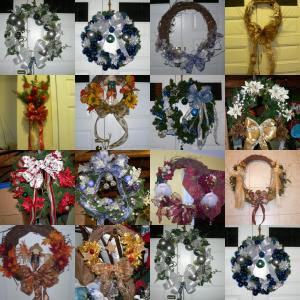 
Wreaths have a noble history dating way, way to the past,
When a wreath was called a 'diadem', a name which didn't last.
Diadem meant 'thing bound round' , so the circle was always there,
Though fabric was very often used to encircle royal hair.
The Persians, Greeks and Romans, had this fashion to the fore,
And 'diadems' were not a thing that common people wore.
In the early Olympics, winners were always crowned
With olive leaves or laurel; with these their heads were bound.
In Rome a chief or hero was acclaimed with a laurel crown;
Julius Caesar  wore one and everyone bowed down.
From diadems came glittering crowns, when gold was incorporated,
And kingly heads with precious jewels were gloriously weighted.
'Crown' comes from 'corona' which also means 'a wreath',
As the crowns ringed and encircled the royal heads beneath.
*
In Eastern Europe common people lit wreaths to usher Spring,
When it was dark and dismal and they were shivering.
And when Christianity arrived they continued the tradition
And candles, lit at Advent, were a welcome new addition.
The 'crown of thorns' was echoed by the novelty of holly.
These wreathes were very sacred, and not in the least bit 'jolly'.
*
In modern times a wreath is used to express our sympathy
If someone known has passed-away; it's laid with dignity.
But a wreath is also a joyous thing, when it's set-up on a door
As a sign of friendly welcome when a party is in store.
The circle of the wreath persists because a circle has no end,
So it represents eternity for the house and for the friend.
Nowadays, as we see above, wreaths are for decoration
And anything and everything can be an inspiration.
Here, in Australia, we find poinsettias look quite fine
Saying 'Happy Xmas! Come in, Friend! Let's have a glass of wine!'
*

Here are some examples of the names of modern wreath types. Study the mosaic on this page and see how many of these you can find!

As usual - so interesting and so entertaining. Happy Christmas to you and your family.

My partner and i knowledgeable many intricacies employing
this site, I needed to be able to replenish the web page lots of times
prior to it to fill effectively. I used to be asking yourself in case your web hosting is
okay? Not really that My business is stressing, however sluggish running scenarios situations can very frequently impact your placement in google and may destruction your current quality credit score in
the event promoting together with askjeeve. Anyway I’m
introducing this particular Rss feed to help my e-mail and may
even be aware of a greater portion of your own respected
exciting subject material.
My web-site : www.zuneauto.com