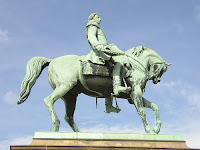 Next time you're in some ancient town and a statue looms ahead,

Whether it's king or captain, you can understand his fate

By looking at the horse's legs and the history they state.

If both front legs are in the air, the rider met his end

On the field of battle, on that you can depend.

If one leg only is on the ground the rider died, for sure,

But later, of his dreadful wounds. (Lots of blood and gore!)

If all four hooves are planted right down on the earth instead,

Be sure the rider died at home, quietly, in his bed.

The gentleman we see above was lucky, presumably.

He looks very much like a soldier but one who got off scott-free.

I didn't know that!

That was about the only bit of information I remember from my school days..odd?

seen this info before but never remembered it. probably won't this time..maybe if you would post this every few months it might sink in