During a week in which 'Copenhagen' dominated the news, I'll start with something cheerful.  Below is the news photograph of local students who topped the state in their chosen subjects in their Higher School Certificate examinations. Some of them are minor subjects but, even so, I was thrilled to see this line-up! As a feminist ( not rabid) I get great pleasure out of seeing so many delightful females topping the list. And it makes me feel doubly sorry for the poor young women in some countries who never get the chance! 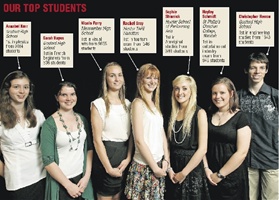 
Then, of course, to change the mood, came the bush-fires! The weather was stinking hot during the week and the Bush Fire Brigade was kept busy. The blaze below was north of Sydney. 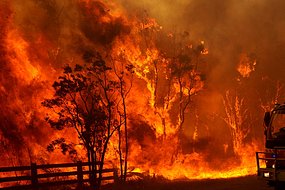 
Newcastle was spared such horror and on SUNDAY we all enjoyed a quintessentially Australian day as Harry's Little Nippers group enjoyed a Xmas party on the beach. (Becca had gone to visit her in-laws in Tamworth for a pre-Xmas get-together.) The weather was perfect and the beach was thronged with Nippers of all shapes and sizes. 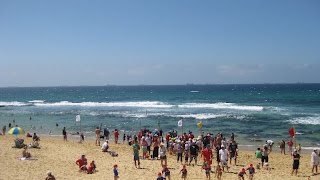 Just one group of dozens. 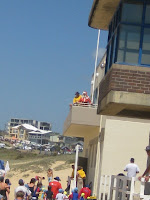 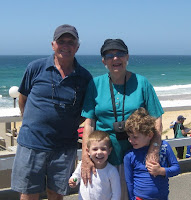 On MONDAY my Probus Club held its annual Xmas lunch at the Madison Hotel. The Committee put-on a sort of comic/religious skit which worried me a bit. As one of the Three Kings I went to a lot of trouble with my costume as you can see! (I'm the blue lady with the paper hat on!) In the event it all went off quite well except that the people outside the door sang in a different key from those inside! 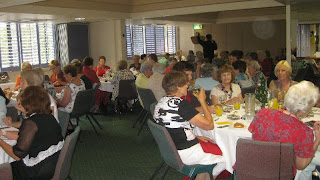 
TUESDAY  was a rather fraught day with lots of interruptions. I'd sold our old microwave on e-bay and I had to wait around, not knowing when it was going to be picked-up. At the same time I had to do some cooking for the evening. (I am very fragile when I'm baking, not being much good at it). When the microwave had gone, I got stuck-in to domesticity, only to have Greg ask me to mind the boys for a while and then to view a house in which he was interested (but turned-down.) Running behind time, we suddenly learned that we had to be at Joy's place an hour earlier than we thought! The Book Group evening was great, though, when we finally got there. My photographs were very poor due to some rather brilliant lantern-thingies Joy had on the tables.

But I did get a shot of the food! 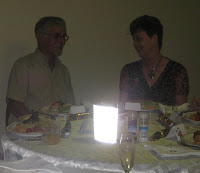 And a rather romantic one of Joy and Dave by lantern-light!


The Scrabble Ladies went out for lunch on WEDNESDAY. Here they are prior to going home after a good game. 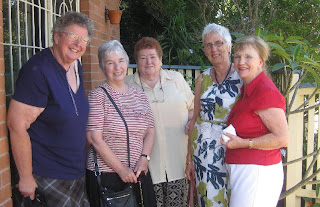 On THURSDAY Malcolm and I looked-after Max as Becca was feeling unwell. He was no trouble, but we had to stay in the air-conditioning because of the heat, so the day seemed long. Three year-olds need constant entertaining! Harry had his Pre-School Graduation in the afternoon and we all went to it.(!!!) It was unbearably hot but the children all behaved well and they sang 'The 12 Days of Christmas' taking individual parts, which I thought pretty clever! 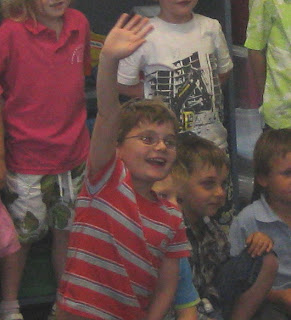 I caught Harry just as he spied Greg in the crowd!

The intense heat continued on into the evening when we went to 'The Stag and Hunter' to help celebrate friend Isobel's eightieth birthday. Isobel ran our Play-Reading sessions last year and she's a great favourite. But most of the guests were theatrical types as Isobel is very much in demand as a director. 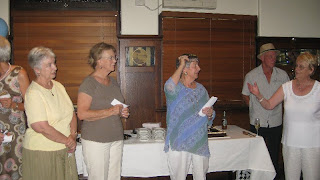 Here we are preparing to sing a little song I  wrote for her.


And that was the Party Season finale! I enjoy parties but they sometimes get a bit much at this time of the year. FRIDAY and SATURDAY were days of blissful normality. It actually drizzled on Friday and it was blessedly cool, and, on Saturday it was a 'perfect English summer's day' and that, in my eyes is as good as it gets. No doubt the coming months will test our heat-resistance, but the days in between are wonderful. As to Climate Change, the outcome of 'Copenhagen' is depressing and confusing; let's hope humanity just muddles through!

Santa looks very feminine! Perhaps that is the radical one! Your sunny scenes are vicariously enjoyed here in snow land that is NYC. Merry Christmas!