This has been, as expected, a very full week. Luckily, the weather has been delightful; warm and sunny with a refreshing breeze. With all the talk of Global Warming I keep expecting Australia to burn to a crisp any minute but this week has proved theres still sanity in the climate! Although there was a slight hitch on Sunday. However, it was crazy politics that dominated local news! The Liberal Opposition in the Federal Parliament was so determined to scotch Kevin Rudd's carbon reduction plans that they ousted their leader! We now have Tony Abbot as leader of the Opposition and his nick-name is The Mad Monk! Need I say more?
But more was to follow! The New South Wales Government then decided to have a 'spill' and we now have a new Premier of our state. She's a half-American half-Australian mother of two with rather a sweet fresh face but little experience. (Her Australian mother married a Yank and moved to America; she, in turn, married an Aussie and moved back here!) That's by the by, of course. But I do sometimes wonder if democracy works!

The 'hitch' in the weather on SUNDAY came in the form of a minor dust storm. It was only like a grey mist but I mistook it for smoke and I was quite nervous driving to Raymond Terrace to Malcolm's car-club luncheon. I wasn't really looking forward to it, as I thought all the talk would be of cars, but I was pleasantly surprised. I sat next to a very interesting man who travels the world photographing motor races. As you can see, we got on quite well!

I can't even remember his name!

On MONDAY one of our Probus members threw a breakfast party and it was one of the most pleasurable events that I remember. She lives in a house high on a hill overlooking Merewether, so it was pleasant gazing out to sea as we ate. 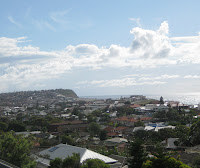 The breakfast was simple but delicious. Champagne, of course, followed by a luscious fruit salad, chicken and nut croissants and strawberries dipped in chocolate. All very civilised! 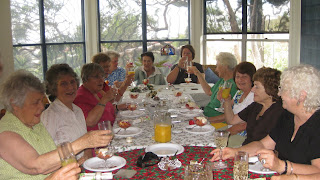 A good time was had by all!

I left a little early because I had arranged to have lunch with my old friend, Joan. We hadn't seen each other for some time, but our children grew up almost together so we had a lot to catch-up on. We had a very light lunch at the Burwood Inn, and then she came back to my place for coffee. 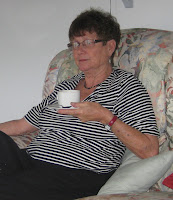 TUESDAY was the day for Malcolm's Probus Christmas Lunch. I'd bought a new blouse for the occasion but it turned quite chilly and I ended up wearing a jacket. We met at the Charlestown Central Leagues Club and it was quite pleasant. I did a couple of poems but I felt they fell flat, and the photos were poor too, so the even wasn't a highlight of the week!
WEDNESDAY was more successful. My melodrama group performed 'Pirate Pie' at the local church hall and it went off very well. The audience was fairly passive, but they all smiled a lot and joined in the songs so I was quite satisfied. Three of the cast members had never played their parts before, but they did very well. 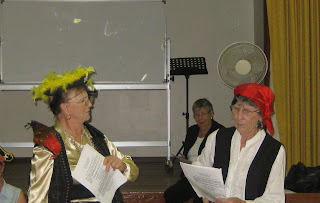 Here's part of the action with me, one hand on the tape-recorder, at the back.

THURSDAY was such a wonderful day, spent at the Lake with Becca, Brian and Max, that I'm giving a whole blog entry to itself!
And FRIDAY was nearly as good, as I went out with Becca on her own to buy her birthday present. I love it when we have a day mooching around the shops together and having lunch. I ended up buying her a handbag, two tops and a necklace. But I found the kebab lunch almost overwhelming! Becca already has her Xmas Tree up. I must get a move on! 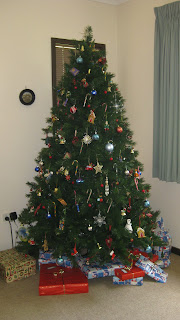 Not long to go!

On SATURDAY I caught up with myself, writing letters, shopping and doing the laundry.It's good to have a dead day now and again!
Till next week.
Brenda.

See my 'compendium' above!
Posted by Rinkly Rimes at 6:38 AM

Hi Brenda, at last I'm able to read your diary again and "catch" up a little.