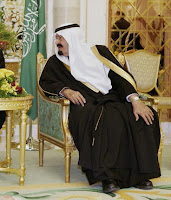 A wealthy Sheik was a generous man; he treated employees well,
Although he was rich and powerful, with lots of oil to sell.
When it was the Christmas season, whatever their faith might be
He almost overpowered them with his generosity.
His Secretary's name was June; she did all that he might require
And the Sheik said 'I want to reward you. What do you desire?'
Now June was very keen on golf; so she answered in a trice
'I know what I want. A set of golf clubs! That would be very nice!'
On Xmas Eve she received a call .... the Sheik sounding almost sad.
'I've bought you a set of golf clubs, but I'm feeling rather bad.
So far I've bought you five clubs and I hope that they will do.
But only four have swimming pools! Is that all right with you?'
*

I don't comment often enough, but I read your blog every day, and love your poetry. Just wanted you to know I'm still here and appreciating you.

That cracked me up. I did not see it coming.

Iloved that one!! ha ha, too funny!

I thought it was funny. I hope the Arabs wont object!
I may pass it on to Sarah - the golfing family.

I'm hoping the clubs all come with memeberships, but then she wouldn't need them, wot? Heh, heh...

I wondering if he's hiring. I could use a job like that! Funny!