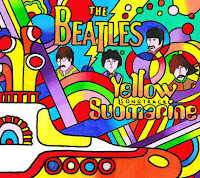 THE YELLOW SUBMARINE
Such controversy there has been
About the Yellow Submarine.
The Beatles all along have said
That nothing dubious should be read
Into the title! Even so,
These gentlemen of long ago
Took drugs; there is no doubt at all.
With their money they had the wherewithal.
They wrote the song for kids, they vowed;
And of its purity they were proud.
It seems that, after the song found fame
Drug-makers pounced upon the name,
Producing capsules yellow-toned,
'Submarines' for getting stoned!
I know it happened long ago,
But I thought you aught to know!
*
--------------------------------------------------------------- 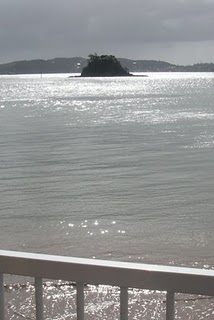 DAZZLE!
When we gaze at a sparkling sea
In the light of brilliant reality,
Sometimes pure dazzle prevents the eyes
From feasting on the wondrous prize.
Only when we capture the same,
Place it in a sort of frame,
Can we appreciate the flash,
The joyous sparkle, twinkling splash,
That made the scene so awe-inspiring
So worthy of our stunned admiring.
A little New Zealand island here.
Photography has made it clear.
*
------------------------------------------------------------
PS
We took Rebecca and Blake out to dinner last night (Brian was on fireman duty in Sydney) to celebrate her birthday. None of the photos turned out well. This was about the best, and, even in this, Blake is definitely looking aloof! The sight of my camera has a dreadful effect on my relations! Incidentally, almost overnight, Blake has grown as tall as me! Or else, perish the thought, I've shrunk! 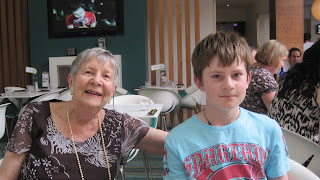 I really enjoyed the Yellow Submarine poem. I used to walk around singing that all the time when I was a small girl. My mom was a Beetles fan. The picture of New Zealand is beautiful, and as far as the boy goes, boys that age always have a tendency to look aloof when a camera is pointed at them. You should see some of the ones of my boys... lol...

That is a wonderful photo of you and Blake! He looks like a very composed person. Is he, I wonder!

re The Yellow Submarine, was a wonderful song, and I am sorry to hear that its title was stolen for such a purpose. I am sure in those days many a song was
written under the influence, and many not, but, at any rate as I write, the folk songs of yesteryear are being
replayed today on PBS for fundraising, and those songs carry that wonderful sound of protest, and cleanup, that we seldom hear today.

i love the yellow submarine...song and your poem. I always enjoy my visits here...so much fun :()