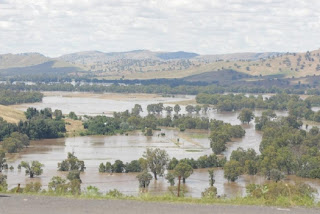 DECEMBER 2010
Oh December, December! Dids't thou forget!
We were promised 'heat' and you've given us 'wet'!
Australia is a drought-and-fire land!
Just now we look as green as Ireland!
Rain! Rain! Rain! We're completely sodden!
We're a dry country! But thou hast forgodden!
*
AND
THE WEARING OF THE GREEN
The sun was setting as we made our way
To the house of a friend one recent day.
The sun was shining through the trees
Where verdancy decked the canopies.
The hills and dales were lush and green;
Not usual for our summer scene.
December's grass, in New South Wales,
Is as golden brown as corn-cut bales.
The shadows of trees look black as ink,
And  the foliage begs for a desperate drink.
It's colourful in a golden way,
Like Britain when bringing in the hay.
Infrequent showers give some ease,
But, sometimes, all they do is tease.
But this year, La Nina, The Girl Child, came!
The weather system we know by name.
Not El Nino, that brings the drought;
(Something we can do without).
We've been awash for weeks and weeks,
With drips and deluges and leaks!
More rain than we have ever seen!
And when flooding stops the world is green!
The dams are filling, but, sad to say,
Many crops have been washed away!
'A land of drought and flooding rain';
That's the Australian refrain.
But, for now, we're fresh and clean!

It's time for the Wearing of the Green! 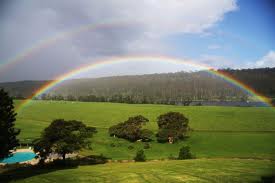 I love both poems - very topical! Although I am over in W.A. which is still terribly dry. Send the rain or way! :)

As green as you are, we are dressed in white - brrr. a nice read these :)

Again, good rhyming from Down Under...

Brenda, love your version of December from down under!

Delightful - both of them. Very different from the Decembers in Wisconsin. Brrrr!

Yep. We need reminding that December isn't white all over the world.

Loved both the poems and perfect descriptions of what it is like Down Under now. The last line sums it all and really serious.

always enjoy the clever way you use your words.
My vote for word of the year
"forgodden"