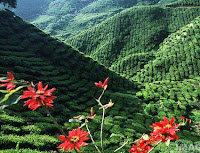 Poinsettias Growing Wild
FESTIVE FLOWER
Have you heard of Doctor Poinsett and his visit to Mexico?
He was American Ambassador in days long, long ago.
He discovered the plant in the wilderness in 1828
And sent cuttings to South Carolina, which was his home state.
At first it wasn't popular, but then improvements were made
And, finally, it was accepted and there was quite a trade
In pots of Poinsettias at Christmas Time, because of the lovely red.
'It looks like the Star of Bethlehem!' all the Christians said.
*
There's a legend attached to Poinsettias and it is rather pleasant.
A young girl wanted to bring a gift but she was the poorest peasant.
So she took a bunch of weeds to church as a gift for the Holy Child;
Just a handful of grasses that she had found growing wild!
And, as she entered the church that day, the weeds grew flowers of red;
So her gift was no longer paltry, it was beautiful instead!
*
Poinsettias now grow in Australia, the climate is just right;
And we love to see them at Christmas Time, so bold, so big, so bright.
* 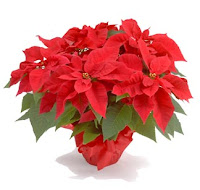 CHEATIN' PUD
There may be other folk around who like to take short cuts.
Who like to get things done at speed without the ifs or buts.
If so I'm here to show you how you can compromise a bit,
And make a 'sort-of' recipe that will always be a hit.
I speak of Christmas Pudding; I know it tastes sublime,
But it keeps you in the kitchen and takes up a lot of time.
Last year we had a barbecue, so we were far from formal,
And my succulent Bread Pudding was delicious and quite normal.
So let me fill-you in on what a Bread Pudding's about
You'll feel relaxed and much less taxed, of that there is no doubt.
Gently heat two cups of milk, be careful how they warm,
Watch the saucepan carefully; a delicate film will form.
Now you must add the butter, that's the golden rule,
And when it's melted in the milk allow the lot to cool.
Cinnamon, nutmeg, sugar, eggs (without the shells, not whole!),
Must be added with vanilla in another mixing bowl.
Whisk together for one minute and then quickly add the milk.
This batter should be creamy and as smooth as any silk.
Now butter a shallow casserole, to stop your pudding sticking.
All this is fast, you'll be surprised at how slow the clock is ticking!
Into a casserole place the bread, all torn up nice and small,
Then pour your lovely batter evenly over all.
Sprinkle with dried fruit, of course, some peel is extra good
And dabs of butter on the top make a really golden pud.
Bake in a moderate oven for an hour or maybe less
Then take it out and sniff the gorgeous fruits of your success.
It smells like a Christmas Pudding, it tastes just like one too!
So you don't need to apologise (oh well, that's up to you.)
Serve it cut in tasty squares with custard or with cream,
And you'll get compliments, I know, from everyone on your team!
I doubt if there will be much left; they'll soon put it away,
But should there be a square or two use the microwave next day.
You'll be free of tension with this easy recipe
So go and join the others around the Christmas Tree!
Ingredients
2 cups milk
1/4 cup butter
2/3 cup sugar
3 eggs
2 teaspoons cinnamon
1/2 teaspoon ground nutmeg
1 teaspoon vanilla extract
3 cups bread, torn into small pieces (french bread works best)
1/2 cup dried fruit
*
Posted by Rinkly Rimes at 5:47 AM

Oh Brenda, I LOVE your poem! Thank you for commenting on my post or I would never have been introduced to your poetry!

I think poinsettias are the most glorious color of red I have ever seen! May I share your poem on my blog?