A Simplicity of Protestors 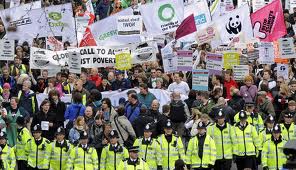 POETIC ASIDES
http://blog.writersdigest.com/poeticasides
We have been asked to write about a group.
A SIMPLICITY OF PROTESTORS
In a gaggle of geese, the geese all match;
That's the way of geese from the day they hatch!
In a herd of cows they all look the same,
Though each one may be known by its own pet name.
In a flock of pigeons they're all birds;
That's how it is with flocks and herds.
But a group of Protestors is variegated
Wherever it is congregated.
The tall, the short, the fat, the slim,
The old, the young, the her, the him!
To say ' a crowd' doesn't state the case;
And 'a mob' makes the motives seem rather base.
No, I choose 'A Simplicity' that's because
They are only united by a cause.
A 'Yes' or a 'No' to this or that
Expressed by the proletariat.
Individuals in the throng
May sing different versions of the song;
Motives may vary, and intentions
Re 'Iraq', 'Taxation', 'Pensions',
But all individuality fades
When Protestors are in Parades.
It's 'For' or 'Against', in black or white.
All very simple... 'Wrong' or 'Right'.
So when Protestors light a fuse
'A Simplicity'  is the phrase to use.
*
-------------------------------------------------------------- 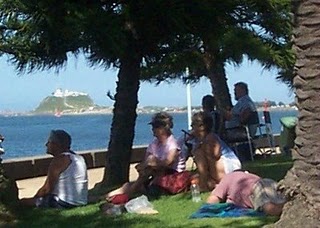 Ours is a working port,
Not like some puffed-up places,
And we are all working folk,
With honest sweat on our faces.
But when we're beneath the trees
On a glorious summer's day,
And the Hunter River's flowing past,
Merrily on its way,
Then we all live like kings
Within the scent of the sea
And there's nowhere else on earth
That we would rather be.
*
Posted by Rinkly Rimes at 2:35 PM