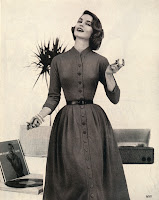 (Not me!)
THREE WORD WEDNESDAY
http://www.threewordwednesday.com/2010/12/3ww-ccxxi.html


I evade impertinent questions regarding my obvious age,
But I have to admit that, in my youth, two things were all the rage!
One was the clinching leather belt, with the buckle on display.
The other was the wedge-heeled sandal; to be worn at work or play. 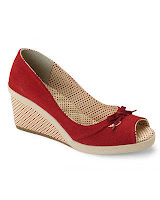 BALLET SHOES
It was over sixty years ago that I sat by the fire,
Listening to the radio and hearing my heart's desire;
A serial on Childrens' Hour; it's name was 'Ballet Shoes';
It came on at a special time, just before the news.
I could hardly wait for Sundays; I hated the days between!
For after all, how old was I? An immature sixteen!
*
Last night I saw the TV show; I found it very trite,
But good enough to pass an undemanding time at night.
The plot was so predictable, the characters unreal,
And, all in all, it had a very adolescent feel.
Which is fair enough because the tale was aimed at the pre-teens,
At least it seemed that way to me, with the rather maudlin scenes.
*
And they didn't play Wolf Ferrari! That was an awful sin.
How I adored his music! It made the show begin!
'Jewels of the Madonna!' Was ever there such a theme;
It could spirit a dumpy girl like me into the perfect dream!
A girl could start out without much and end up with it all!
Cinderella! Sweetheart! You're going to the ball!
*
I'd sit there listening , engrossed, there, in the fire-light.
Knowing that, though things weren't too good, it would all turn-out alright.
I believed the story absolutely; it all felt so true!
With the music of Wolf Ferrari there was nothing I couldn't do!
I never made my mark, of course, or entered the promised land.
And isn't it a pity that the tale now seems so bland.
*
Posted by Rinkly Rimes at 10:31 PM

What a lovely write.. how does age matter..

A walk down memory lane! I, too, remember the 50s!

All of these items seem timeless in a way..but you have captured what they mean to you beautifully..Jae

The fifties was the best time to be a student in London.The streets were safe,the parties were great and all without drugs.
The downside for me was National Service! two years lost.

Wonderful memories and that style of poem fits beautifully with the era. Great job.

That was wonderful!! I had only seen it in the old movies and now you have refreshed my memories all so well in your own inimitable style :)

I so loved both of these. The wedge heel is back, you know and belts are all the rage with my daughters - but of many styles. I even bought a few years ago, DVD's of an old radio show - The Shadow - and we had a lot of fun sitting with only the fireplace aglow.

Made me smile! In my 1970's teenage years, those wedge heels made a keen comeback. I loved my kelly green pair!

both a blessing and a curse to go back... really enjoyed yr humor at looking back and the sorrow of it's blandness..

Very nice commentary with the 3WW prompt. I enjoyed it; felt a bit like I was in an Audrey Hepburn movie for a moment!

My coder is trying to persuade me to move to .

net from PHP. I have always disliked the idea because of the expenses.
But he's tryiong none the less. I've been using WordPress on a number of websites for
about a year and am concerned about switching to another platform.
I have heard fantastic things about blogengine.
net. Is there a way I can transfer all my wordpress content into it?
Any help would be really appreciated!
My site : ez Cash loans