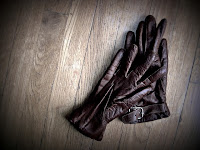 
CAST OFF!
It seemed fitting that I should wear them for that purpose!
You were with me when I bought them from the store.
They were made from the finest leather.
Yes, we bought the gloves together,
For we knew we'd be 'together' evermore.
*
Oh, it's clear that we were overly sentimental!
Sometimes we'd wear one each! I swear we did!
And you sewed a little sign,
Showing which was yours and mine,
Inside each glove of softest, warmest kid.
*
Yours said 'Marnie', mine said 'Beau'. Do you remember?
When I wore them as a pair it seemed to me
That you still held my hand,
That, still, everything was planned,
And this was how our lives were going to be.
*
But everything went wrong last Tuesday evening,
When I saw you out with Peter, looking snug!
You were gazing at his face!
Yes! He was in my place,
And he looked so damned delighted and so smug!
*
Gloves are useful when one plans to do a throttling!
Detective novels make that very clear.
Finger-prints? Ah, not a chance!
For our symbols of romance
Would prevent that sort of clue! No clues! No fear!
*
So it's done! My little 'big' romance is over!
But so is yours, my little sweetie-pie!
'One kills the thing one loves',
And my delicate kid gloves,
Were round your neck and made sure you would die!
*
I dropped them on the floor as I was leaving!
Then I couldn't get back in although I tried!!
Then I gasped at the realisation
Of my terrible situation!
The gloves had 'Beau' and 'Marnie' sewn inside!
*
-------------------------------------------------------------- 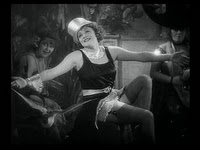 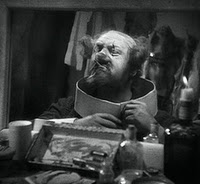 THE BLUE ANGEL.
A sad clown? Was there ever
A clown as sad as he?
Or was I just impressionable,
As young girls are wont to be?
It was my very first 'foreign film';
To me it was exotic,
The black-and-white of the images
Made it the more hypnotic.
Then there was the music,
And a language quite unknown
And a certain air of decadence
Added a suggestive tone.
Marlene Dietrich's German
Sounded ribald and compelling
And her gaudy giddy life-style
Made the story worth the telling.
But it was the tragic professor
Who caused my flesh to creep.
I could hardly bear to watch him
As he got in far too deep.
And when he finally went mad
When they broke eggs on his head,
And began to crow like a cockeral
I viewed the screen with dread.
Even now I get goose-pimples
Just remembering it all.
How a worthy man became a clown!
How love came before a fall.
*
Posted by Rinkly Rimes at 11:39 AM

Where did you see it BB?

Great poem Brenda,
It was touching. Could've ended in a more happier mode.

A poem with a rhyme scheme...How ambitious! Great Magpie Tale about the gloves.

A nasty little twist at the end of your very entertaining Magpie!

Hard to do that perfect crime..please read my prompt..I can keep a secret!! Like this a lot..

What a wonderful poem/story. I really enjoyed it. Very cleverly written.

Great rhyming - and the ending is just right.

Brilliant as always Brenda...i love this! :-)