A CHRISTMAS WISH
If only we could all return
To that childhood era for which we yearn.
When magic pervaded everything
And who knew what 'the big man' would bring!
'I can't wait!' my son would say,
'Is it today? Is it  today?'
(Now he's a parent and worn down
By trips to shops in the busy town.)
Look at the picture drawn above;
Who knows what that stick-child's thinking of?
Is he placing a gift upon the tree
Or is he saying 'This one's for me!'
It doesn't matter! He's feeling bliss!
Could we but feel the same as this.
Look at the face, half-turned to smile
In a 'Mummy! Look at me" type style.
No hair, no ears, no Star that's shiny,
And even the Xmas Tree is tiny!
Caught in the moment! Utter perfection!
Oh we have only a slight connection
To how we felt in days of yore.
(I must rush! I'm off to the store!)
* 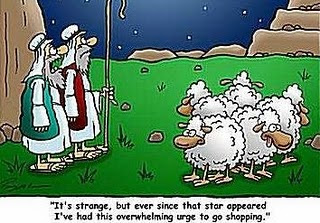 I've been asked to make a speech and 'Bah Humbug!' is the title,
And something rather seasonal is absolutely vital.
Of course, we're all familiar with that old Dickensian phrase;
That Scrooge expletive rubbishing Victorian Christmas Days.
Being assigned this topic has made me think a bit
And I have to say, in many ways, 'Bah! Humbug!' seems to fit!
My up-bringing was Church of England, very, very staid,
So Christmas was a bit subdued, not a big parade.
Three times to church on Christmas Day, and carols, only, sung,
And the all-insistant melody of church-bells being rung.
We had a special meal, it's true and small gifts were exchanged,
But my father'd find the Christmas of this century deranged!
I turned my back on organised religion as I grew;
I simply felt I could not find the proof that it was true.
But a lingering reverence remains for beliefs that are sincere,
And I even envy other folk who hold religion dear.
I'd never sneer at people who find church makes them secure;
It must be nice to feel one's future's certain and quite sure.
And there's nothing wrong with Festivals, or even spending cash,
Or buying Santa brooches with little lights that flash;
Or getting drunk at parties and flirting with the boss.
But it hasn't got a lot to do with Christ upon the Cross.
And I feel for True Believers as they find their faith demoted,
With cheap and cheerful Xmas cards having Christian phrases quoted!
It pains me hearing 'Rudolph' sung straight after 'Silent Night'.
And 'Jingle Bells' with 'Hark the Herald Angels'! That's not right!
Angel-fairies, flashy Crib-scenes, anything that's bright and crass,
Mixing Christ with Jolly X-mas, cheap old cheerfulness en masse!
I feel for all the truly faithful, seeing their story treated so.
All that whizz-bang arrant nonsense when they just need candle-glow.
I'm all for a Family Festival, maybe at New Year,
A great big Get-Together, with folk from far and near.
And if Spending Big is part of it, well, it helps the economy;
We could pile up New Year presents underneath a New Year Tree!
The truly Christian Christmas could be a quiet affair,
In which we non-believers wouldn't even need to share.
But the mad conglomeration in which now we all take part
Pains me because, if he were here, it would break my father's heart.
He'd feel that something special had been horribly debased
And he'd miss the gentle reverence which now has been replaced.
Here's to a Family Festival, flash presents, a big feed!
But let's not mix it up with someone's truly Christian creed.
*
Posted by Rinkly Rimes at 6:02 AM

"Bah Humbug" is a winner! I loved the thoughtful first poem, but the second one stirs the shackles...and rightfully so! I (almost) loathe the huge plastic fanfare of Christmas these days! And I'm getting worse! My hubby and I no longer give gifts to each other! We simply go to a special lunch at Portsea Hotel by the sea. We dine in glorious style together and the time is so precious! This year, my son (from Sydney) is joining us too! That to me is the spirit of Christmas...giving time to each other away from the trappings of everyday life!

Ditto, ditto, ditto!!! I'm 'not doing Christmas' with my daughter.

A Christmas Wish is a great poem...
I can feel the Christmas heat...
Very well done again :)

As for me Christmas is a time of remembering and celebrating the birth of Jesus. As long as we find peace and joy in our heart the better.

Have a nice MYM

I grew up in Borneo, we didn't have santa. I don't tell my kids about Santa here in New Zealand.