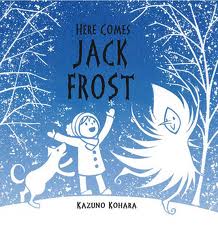 Blue with cold! A blue, blue day
With Jack Frost rollicking on his way,
Nipping the fingers and the toes;
Making a cherry of a little red nose.
Trees a'sparkle, azure sky,
Flakes of fresh snow drifting by.
Send some of your chill down here
Where it's the hottest time of year!

SURE BET!
The gentlemen were gathered in a group at the casino
And the stakes were getting higher all the time,
When, waltzing in came Lulu from the beach at Portofino,
And she soon complained she'd only got one dime.
'I know!' she cried, excitedly,'I'll risk all on one throw!
If I win I'll get a thousand! If I lose
I'll merely leave the table  and you'll scarcely see me go,
And I'll slink away and simply nurse my blues.'
'O.K.' said all the gentlemen, 'Pay up just what you've got
And take the risk! We know you'll never win!'
'Well, first' said Lulu, 'I must strip!  I'm feeling rather hot!
And I always have more luck when in my skin!'
So very, very slowly, she peeled off all her clothes,
And she stood there looking wonderfully curved.
The gentlemen were gob-snacked by her delicious pose
And, quite honestly, they found themselves unnerved!
Lulu threw the dice and then let out a joyous scream!
'I've won! ' she shouted, jumping up and down;
'I've won a thousand dollars! That's always been my dream!
And now I'll go and spend it in the town!'
She grabbed her clothes and money and left with an 'Adieu!
Leaving the men the victims of a crime.
And not a single one recalled the number that she threw!
They'd been looking at the lady all the time!
*

Xmas festivities continue apace. Today we had our Probus Club Xmas Party. We tried out a new venue and discovered that the food was delicious. Our only complaint was that the room was very noisy, with metal chairs on a wooden floor, and dozens of women chattering!﻿ The restaurant, which is new, was called 'Sprouts' which I think is an odd name as sprouts are the most disliked vegetable in Australia!

'Sprouts' wasn't right by the river, but we could see the cargo ships sailing up-stream from there.

There was a hubub when we all got together.

The Committee members staged a silly, brief skit I'd written.  I am, believe it or not, dressed as a Turkey on the right! Unfortunately the turkey impression is lost in this photo! Malcolm had made it so that it was a cooked turkey on a plate (hat). It even had legs sticking up, decorated with frills! You'll just have to imagine it! 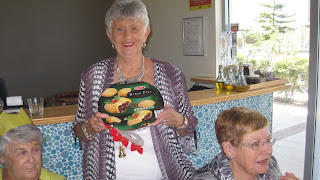 I include a special photograph of my friend Joy Hughes who was dressed as Mince Pies! This is because she's one of the few people I know who actually looks at my blog!!!!!!
*
Posted by Rinkly Rimes at 6:55 PM

It looks like you and the gang had a good time at Sprouts.

Jack Frost is perfect for Blue Monday. I hope you have a great day and enjoy all that the day brings your way. Blessings...Mary